Points but Mixed Emotions for PREMA in France

Points but Mixed Emotions for PREMA in France

PREMA Racing claimed another points finish as the ninth round of the Formula 2 Championship in France came to a close.

Jehan Daruvala started on the prime tyres, opting for a long stint from 10th on the grid, banking on a late-race safety car disruption.

However, a second Safety Car did not appear. Still, the Indian driver put in a late charge on the options to fight back to seventh, allowing him to consolidate fourth place in the drivers’ championship.

Daruvala said: “Starting P10 and finishing P7 is not too bad:

“I think our strategy was quite good. We gambled on having a Safety Car, which eventually didn’t come out.

“The boys did a good pit stop again. At maximum, we could have gained a position by boxing a lap earlier, but as I said, we were gambling on a Safety Car to try and get a race win or a podium.

“In the end, P7 was a good result from where we started. We need to find more pace on Friday, and surely we will be fighting for the front on Sundays. That’s the goal for Budapest next weekend.”

In the sister PREMA, Dennis Hauger had more of a troubled race.

The Norwegian had a good start and was gaining positions quickly. But unfortunately, contact meant the 18-year-old spent battling damage for the rest of his race, causing him to finish in 16th.

Hauger said: “It was a hard race. I had a decent start and a decent first lap, and I gained a few positions.

“Then two cars in front just collided, and I just got caught up in the middle of it, couldn’t avoid it.

“After that, I made a few positions up on options and at the beginning of the prime stint.

“I don’t know if there was some damage, but I struggled a lot with rear temps.

“Definitely some good bits coming up in the middle of the race, which was still compromised by the early crash.”

PREMA Racing hopes the next race in Hungary will be better for them when Formula 2 returns on the 29th of July. 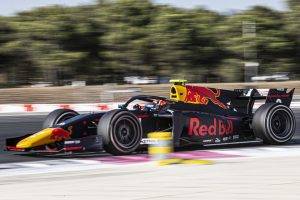