Post-Qualifying Penalties Rain Down in Jeddah

Post-Qualifying Penalties Rain Down in Jeddah

Oli Caldwell, Jüri Vips, Frederik Vesti, and Clément Novalak were all deemed to have impeded other drivers.

Vips, Vesti, and Caldwell all received a three place grid penalty for Saturday’s Sprint Race. They will start in sixth, 17th and 19th, respectively.

Vesti impeded Ralph Boshung at Turn 27, who was looking like he was heading for pole position.

Caldwell unnecessarily forced Vips to brake on a push lap, into Turn 22.

Novalak received a five place grid penalty for the Sprint Race for impeding Caldwell into Turn 22. He will start his race in 15th. His ‘lack of situational awareness’ was deemed to have dangerously impeded Caldwell.

According to race Stewards, Amaury Cordeel, didn’t slow sufficiently for the Red Flag and double waved Yellow Flags, while passing Logan Sargeant’s stationary Carlin car. The Belgian has received a 10 place grid penalty on Saturday and will start in P20.

Jack Doohan’s penalty for a fuel infringement is a DSQ, and therefore he will start at the back of the grid in both the Sprint and Feature races.

Benefitting the most from this shuffle in order is PREMA driver, Dennis Hauger, who starts the Sprint Race on reverse pole.

Ayumu Iwasa now goes from P4. If the DAMS driver demonstrates the same overtaking abilities we witnessed over the Bahrain weekend, Iwasa could be on for his first podium.

This is how the Sprint Race grid now looks: 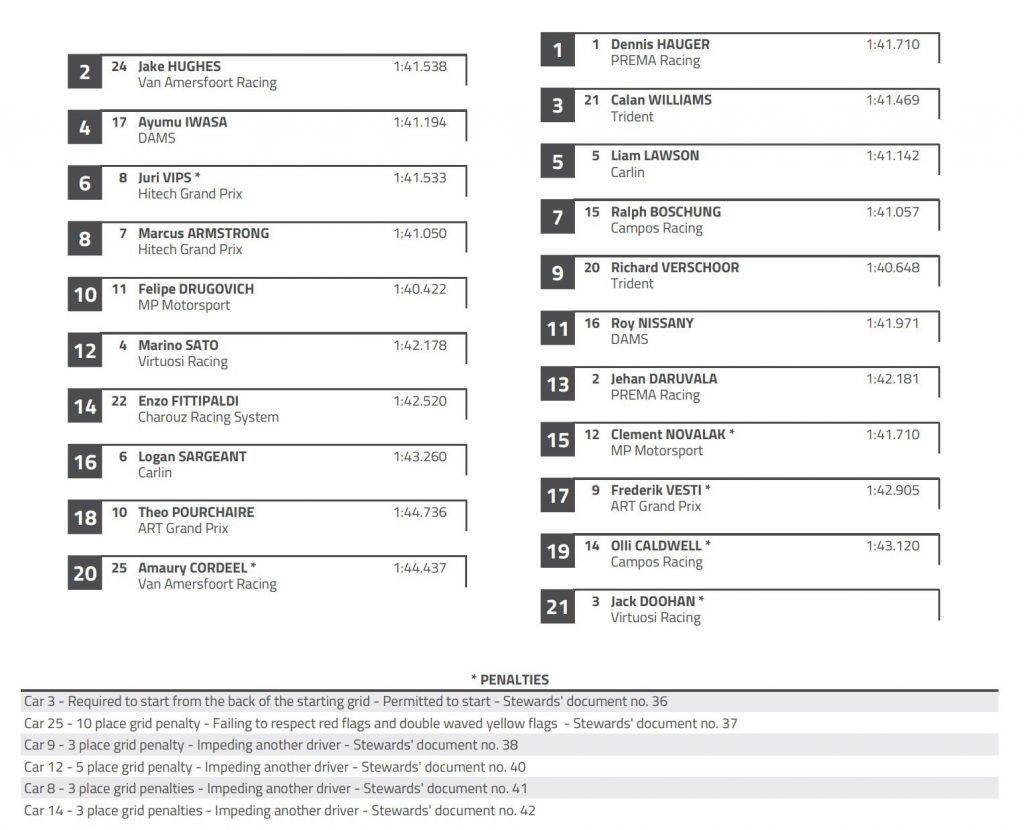