Ilott put the disappointment of Belgium behind him in the best possible way as he took his fourth pole of the season and his second in a row at Monza.

Mick Schumacher hit the wall quite late, which ended the session early, but Ilott had already put his time on the board. A time fast enough to beat Tsunoda by 0.030s. Luca Ghiotto clinched third and a second row start for the Feature Race at his home event.

Tsunoda had all eyes on him after he topped the only practice session and after the first run he was leading the times, but still had plenty of time to find.

The Red Bull Junior was the first to break the 1m 33s barrier but wasn’t the only one. Schumacher and Christian Lundgaard both found two more tenths both found two tenths on Tsunoda’s time. Jehan Daruvala, Dan Ticktum and Nikita Mazepin were all able to better Tsunoda’s base time just ahead of the halfway point of the session.

Ticktum led the cars back out on track but made a mistake on his first flying lap and provisional pole sitter Schumacher didn’t do much better which allowed four drivers to get ahead of him.

Title contender Ilott had been unusually quiet for most of the session but managed to put in the lap when it really mattered. The Brit took a mega tow from Felipe Drugovich and beat Tsunoda by three-hundredths of a second.

Callum Ilott said: “Pole again in Monza, two years in a row, it’s great to be back. After Spa as well it’s good to be back on form. I’m really happy with the session. It unfolded quite surprisingly really, but I put in a good lap. I’m in a good position so thanks for the team, and hopefully, we’ll have a good one tomorrow.”

Yuki Tsunoda said: “It was really close to P1. It’s a shame, but we did a really good job as a team. We just need a good race tomorrow, like Spa race one, looking forward to tomorrow.”

Luca Ghiotto said: “I know I left something on track so we would have been better. We take it as it is. P3 is still my best ever starting position in Monza, so if I see it from that side, it’s quite positive. Especially after the problems we had in the last few weekends in qualifying. It’s a good step forward, and I can not wait to go racing tomorrow.”

PREMA have a race against time to fix Schumacher’s car for the Feature Race tomorrow while UNI-Virtuosi and Ilott will be gearing up for another front-row start when the action gets underway at 3:45pm local time. 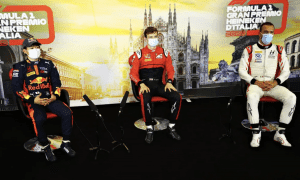