Théo Pourchaire and Jüri Vips managed to take P2 and P3 respectively in the first Qualifying session of the 2022 FIA Formula 2 Championship, despite frustrating sessions for both drivers.

The two highest-placed returning drivers from last season will start right at the pointy end of Sunday’s Feature Race, but neither driver felt they had a perfect Friday when speaking to F2 media.

Pourchaire finished just over a tenth behind polesitter Jack Doohan, but made life difficult for himself when his first quick lap was deleted for going beyond track limits at turn 4.

“There was a lot of pressure [on my final lap time] because otherwise I would have been P14, so I needed to do a really good lap, and I did the job.

“It was difficult mentally, I was screaming on the radio, because it felt like I was in the track limits, then I saw the video and it was clearly a mistake from my side.

“I did a good lap on the first push and then my engineer told me my lap time was deleted, so I needed to concentrate on the last push otherwise I was P14. It was not easy.”

Jüri Vips nearly collided with rookie Dennis Hauger at the pit exit while on a fast lap, and was hindered by traffic on his flying lap.

“The car was amazing, the lap was very good as well. I’m very happy but I’m slightly annoyed because I got traffic in the middle sector, there was a car parked on the apex of turn 11. Mixed emotions but a very encouraging session.”

“It was a bit of a rookie error from [Hauger]’s side. We got quite lucky, that could have been a big shunt.”

Despite such a close call, the Estonian driver was able to quickly put the incident to the back of his mind, and set a rapid qualifying lap.

Pourchaire and Vips will line up P9 and P8 respectively tomorrow as the top 10 positions are reversed for the Sprint Race.

Both drivers will hope for a more straightforward weekend to guarantee a strong opening round as they try to build a title challenge. 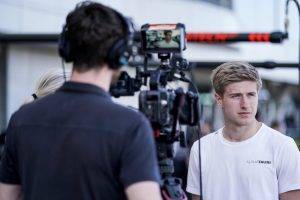