Théo Pourchaire celebrated what he called a “crazy weekend” at the ninth round of the FIA Formula 2 Championship with a podium in the Feature Race in front of his home fans.

After losing his podium due to a penalty in the Sprint Race, the Frenchman responded in the Feature Race, moving up from fifth on the grid to take second place at the chequered flag to give the adoring French supporters a celebration that the stewards wouldn’t take away.

During the post-Feature Race press conference, Pourchaire reflected on the weekend in Le Castellet:

“It was a crazy weekend; I’m so happy to have raced in Paul Ricard. I made two podiums, in my heart, at least! It was amazing, the fans… I would just like to thank them.

“It’s finished for this year, no more French Grand Prix, I will miss it, but [I have] good memories for the future and I will keep that forever in my mind and my heart… it’s amazing.”

That second place finished looked unlikely on Friday evening, after Pourchaire qualified in fifth, on a track where overtaking is known to be difficult. However, the ART Grand Prix driver demonstrated the power of the undercut, pitting into clear air, where he unleashed his true pace, overtaking Frederik Vesti and Jack Doohan through the pit stops.

Although that strategy would prove the key to Théo’s success, he was unsure about making the call to pit so early on in the race:

“I was not happy when my engineers told me, ‘Box, box this lap,’ I said, ‘Why? why should we box?’ The most important thing in the team is to trust each other… the engineers are doing a very good job

“Today the strategy was on point. Big thanks also to the mechanics who did a very good pit stop. It’s teamwork in the end so big thanks to them, and we need to do more races like that.”

While it seemed like a very quick reaction to the race situation, ART’s strategy had already discussed the decision to pit early before the race:

“There were two possibilities: to go very long with the options… or to box earlier if we were stuck in a DRS train, which I was. The undercut was amazing and I made some good overtakes as well.”

After a successful Feature Race, the Sauber Junior driver has reduced his gap to the Championship leader Felipe Drugovich while capitalising on Logan Sargeant’s misfortune to take P2 in the standings.

That result led to a much better feeling for Pourchaire, less than 24 hours after losing his Sprint Race podium:

“I wanted a trophy back home, because unfortunately, I had to give back the trophy to the Championship leader yesterday, so I wasn’t very happy about that! I’m very happy I got a podium at my home race, I’m very very proud of that.”

With five rounds remaining this season, Pourchaire hopes to continue to outscore his Championship rivals. He will want to repeat France’s Feature Race when the Formula 2 action returns in Hungary next week. 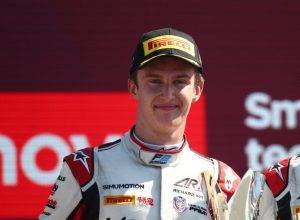