Due to Monte Carlo’s unique characteristics, Qualifying was split into two groups. Group A, consisting of even-numbered cars, would go out on track first for a 16-minute session, whilst Group B’s odd-numbered cars would go out second.

Group A got the first half of qualifying underway under glorious sunshine. The 11 participants used their first lap to try and get their tyres up to temperature.

Petecof was the first driver to show his pace, the Brazilian went fastest with a 1:26.008 to lay down a benchmark to his rivals.

Pourchaire then briefly went fastest on his first flying lap with a 1:22.843, before the Frenchman was pipped to the top by Jüri Vips, who was over three-tenths quicker than the ART driver.

Pourchaire fired back with a 1:21.567 to return to the top of the timesheets, however, the Frenchman was once again beaten by Vips. The Estonian once again took provisional pole with a 1:21.523.

Lirim Zendeli endured a difficult Qualifying session as the German went too deep into Sainte Dévote and had to go down the escape road.

Pourchaire went fastest again with a 1:20.985, and the Sauber Junior stayed top for the rest of the session. Oscar Piastri’s final lap was over four-tenths behind Pourchaire’s, with Vips not getting a final run after damaging his steering. The early pacesetting Hitech driver would finish the session third fastest.

Roy Nissany was fourth quickest in Group A, ahead of Felipe Drugovich, who came close to tapping the wall during the session. Jehan Daruvala rounded off the top six.

With the track getting faster and hotter in the latter part of the first session, Group B’s session got underway. The second session saw championship leader Guanyu Zhou and Liam Lawson, along with Macau Grand Prix winners Dan Ticktum and Richard Verschoor, all hoping to snatch pole position.

Ticktum was the first of the big players to go on a flying lap, with the Carlin driver setting a 1:23.004 which was over three seconds down on Pourchaire’s provisional pole time. Zhou then improved to go over a second quicker than Ticktum to top Group B with four minutes left.

Shwartzman then went quickest of Group B with a 1:21.869. With a minute left, it looked like Pourchaire had got pole position for Monte Carlo wrapped up.

Despite Shwartzman improving again on his final lap,  no one could catch Pourchaire. The Frenchman took pole for Monaco, on his first appearance ever at the Principality, ahead of Shwartzman and Piastri.

Ticktum, Vips and Ralph Boschung, in an impressive performance from the Campos driver, round out the top six.

Nissany qualified in seventh ahead of Christian Lundgaard, as the fifth row is an all UNI-Virtuosi affair with Drugovich ahead of Zhou.

Daruvala will line up 11th alongside Lawson, with David Beckmann and Marcus Armstrong sharing the seventh row.

Richard Verschoor was 15th fastest ahead of countryman Viscaal, with Zendeli, Marino Sato, Petecof and Guilherme Samaia completing the top 20.

Returnee Jack Aitken could only manage 21st fastest whilst Alessio Deledda was last and outside of the 107% time. The HWA driver will have to get special dispensation from the stewards to race on Friday and Saturday. 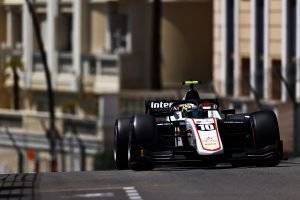