Théo Pourchaire’s Feature Race win at the first round of the FIA Formula 2 Championship was far from easy for the Frenchman. After qualifying in P2, he emerged victorious from a dramatic race full of incident and overtaking.

Pourchaire bounced back from mechanical issues which put an end to his Sprint Race yesterday to win the all-important Feature Race. Speaking in the post-race press conference, Théo was quick to praise his team for their efforts in repairing the car.

“We had an engine failure, the car was on fire in the pits. Big thanks to the team and the mechanics who were there until 3AM, it was not easy. Today we won the Feature Race and gained a lot of points. P2 in Qualifying and P1 in the Feature Race – we are very happy with this weekend.”

The Sauber junior driver managed to capitalise on Yüri Vips’s misfortune, as the Hitech driver suffered a slow pit stop, and fell down the order after having led the race.

Pourchaire’s own race was far from straightforward, narrowly surviving contact with Jack Doohan as the pole-sitter emerged from the pits.

Speaking after the race, Pourchaire said: “He touched me, I felt something and I was really scared that I had a puncture. I left him a lot of space, it was a close call.”

More drama was to follow for the eventual race winner, who sustained damage to his visor in the latter stages.

“My visor broke, a bit of rubber behind Drugovich [hit me]. It cracked on the left side with 12 laps to go. It was so difficult to concentrate, you still need to push and manage the tyres; it was so difficult.”

One last challenge was on the way for Pourchaire, in the form of a late Safety Car restart, made even trickier by a slow-moving Safety Car starving his hard compound tyres of temperature.

“It was a lot of pressure, and the Safety Car was going way too slow. This year I’m trying to work on not screaming over the radio every time, but I wanted to because the brakes and tyres were nowhere, it was almost dangerous.”

Vips and Liam Lawson, sat either side of Pourchaire in the press conference, both agree, with Vips adding: “We were in third gear along the main straight, it was ridiculous.” Lawson then reassured him: “I shouted on the radio for you.”

After retaining his lead on that final lap Safety Car restart, Théo Pourchaire now leads the drivers’ standings, and will hope for a repeat performance when F2 returns in Saudi Arabia next week. 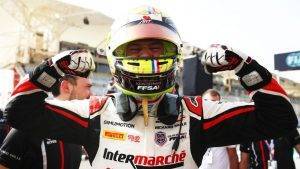