In spite of achieving his third FIA Formula 2 podium in the Sochi Feature Race, Théo Pourchaire‘s wait for a F1 seat looks set to continue.

With rumours linking UNI-Virtuosi’s Guanyu Zhou with the Alfa Romeo for 2022, the ART Grand Prix driver remains cautious about his chances.

“You’ll have to ask Fred Vasseur or Beat Zehnder, the bosses of Alfa Romeo. I mean, I’m only an F2 racer.

“There’s still two rounds to go, a lot of points to take. For sure they are waiting, I understand and I try to do the best job possible.

Prior to racing at Monza, the Sauber Academy junior revealed that his performances in Rounds 5 and 6 could decide whether he would be lining up alongside Valtteri Bottas next year.

Pourchaire’s second place finish continues an impressive rookie campaign for the 18-year-old. He sits fifth in the drivers’ championship, only 15 points behind third-placed Robert Shwartzman.

Although a third victory so far this season alluded him at the Sochi Autodrom, Pourchaire had a positive outlook on his day as he put PREMA’s Oscar Piastri under pressure for the victory throughout.

“We kept pushing we did almost no mistakes. It was really, really, tough physically for me. The neck was hurting at the end and Turn 3 was difficult at the end.”

Crucially, a stellar start from P3 on the grid saw him jump Carlin’s Jehan Daruvala for P2 and put himself firmly in Piastri’s wing mirrors.

However, the overcut failed to pay off as the Alpine Academy driver overtook Pourchaire following his pit stop.

“The start was good, then I think we were three or four wide which was a bit difficult into Turn 2 but I managed to be P2.

“Then on the first stint of options tyres I was really fast. Then we pitted a lap later and the out lap was difficult.

“Oscar managed to overtake me, then I was pushing but it was impossible to catch him and enter the DRS zone.”

“The most difficult part of the race was the traffic. At one moment I think it was a DAMS, Nissany or Armstrong I don’t know, but it was blocking me a bit for two-three sectors, an entire lap and I lost a bit of time there.

“Maybe I could catch Oscar but we never know. I’m happy with that P2.”

Heading into the final two rounds in Jeddah and Abu Dhabi with 130 points left to play for, all eyes will be firmly on Pourchaire and his F1 chances. 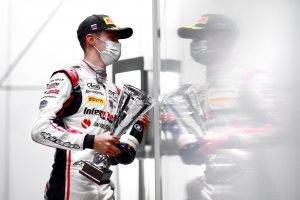