Théo Pourchaire has fully kickstarted his FIA Formula 2 Championship challenge, after romping home to victory around the famous Monaco streets and becoming the youngest race winner in the series’ history.

Pourchaire lined up on pole position for the Feature Race. The Frenchman had PREMA’s Robert Shwartzman alongside him on the grid. The Russian was looking to make up for his disappointing weekend, and championship, so far.

In contrast to the morning’s Sprint Race 2, the race started on a bone-dry track. Pourchaire produced a great start, keeping the lead into the first corner at Sainte-Dévote. Shwartzman slotted in behind the ART driver in second place and was unable to get past.

It was a disaster further back for Jack Aitken, who couldn’t get off the line and fell a lap behind. Not the ideal Feature Race return for the Brit, who replaced Matteo Nannini in the days running up to the Monaco Grand Prix.

Over the first lap, Pourchaire pulled out an impressive 1.5-second gap over Shwartzman, while Oscar Piastri, Dan Ticktum and Jüri Vips kept a watching brief behind the leading duo.

In the opening stages, the gap between Pourchaire and Shwartzman stayed around 1.3 seconds, as the Russian began to slightly peg back the race leader. Behind the leaders, third-place driver Piastri dropped back by Lap 5, creating a two-horse race up-front.

Shrugging off the heartbreak of losing his Sprint Race win on a technical infringement in the morning, Liam Lawson went aggressive on strategy.

The Hitech driver came into the pits early to switch from his supersoft tyres onto the slower but more durable soft compound tyre. Unfortunately for the Kiwi, he suffered a slow stop due to an issue with his right front tyre.

Another early stopper was fellow Red Bull Junior Jehan Daruvala. The Indian was awarded a 5-second penalty for speeding in the pit lane. However, it was a punishment Daruvala never had to serve, as he later retired following contact at the Nouvelle Chicane with Gianluca Petecof.

At the halfway stage, fourth-placed Ticktum began to close up to Piastri in the battle for the final podium spot. The Carlin driver brought Vips along with him to make it a three-way duel for the silverware.

Meanwhile, Brazilian driver Felipe Drugovich kept plodding away on the alternate strategy in his UNI-Virtuosi. The Brazilian was another driver who pitted early for the soft tyres, but set fastest lap after fastest lap to claw himself into contention for a sizeable points haul.

Despite concerns about the ineffectiveness of the undercut, Carlin pulled the trigger to bring Ticktum into the pits for the supersoft tyre. PREMA responded just one lap later, with a Piastri pit stop to cover off Ticktum. Fortunately for the Australian, the decision paid off, and he kept hold of third place.

Second-place driver Shwartzman dove in for his mandatory pit stop on Lap 30. Lady luck has yet to grace Shwartzman this year, though, as his pit stop was excruciatingly slow. The Russian lost time and track position to Piastri and Ticktum, and the chance for his first podium of 2021.

Only one lap later and DAMS driver Marcus Armstrong crashed at La Rascasse after contact with Vips. Armstrong had no choice but to retire, bringing a frustrating climax to a difficult weekend for the Kiwi.

Despite the brilliance of the Monaco marshals, a Virtual Safety Car was necessary to clear the stranded DAMS car. However, moments after the wreckage was cleared, the VSC lights were switched back on. Lirim Zendeli had collided with the barrier, losing his front wing after not being able to stop on his cold tyres.

With the green flags waving, an under pressure Piastri locked-up into the Swimming Pool chicane which allowed Ticktum to draw alongside.

The pair battled into La Rascasse, but Ticktum ran out of road on the outside line. With nowhere to go, the Brit’s Feature Race was over, as his Carlin was left stranded on the road.

Out front, Guanyu Zhou was leading after nursing his soft tyres almost the entire race distance. On Lap 37, he switched onto the supersoft tyre for a short blast to the end of the race. The UNI-Virtuosi driver rejoined in P5, just ahead of Ralph Boschung. A great reward on the alternate strategy after a P10 start.

The sister UNI-Virtuosi of Drugovich also was looking good on his alternate strategy. The Brazilian found himself in third place and looking at his second podium visit of the weekend after starting in P9.

Over the remaining laps, Pourchaire continued to control the event without allowing Piastri to get anywhere near him. The Frenchman serenely kept his ART on the road to claim a magic Feature Race win on the streets of Monaco.

In doing so, the ART driver became the youngest ever winner of an F2 race. The 17-year-old takes the record away from Lando Norris.

After this epic weekend of action at Monaco, Formula 2 will now head to Azerbaijan for the third round of the championship in two weeks’ time around the streets of Baku. 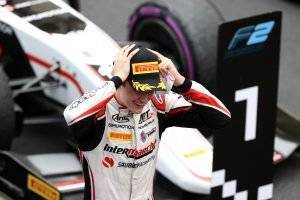