Théo Pourchaire took his second win of the season and his first since the Bahrain Feature in the opening round to take the Drivers’ Championship lead after an eventful Feature Race in Imola.

The tone of the race was set from the off as Jack Doohan and Dennis Hauger collided on the grid, knocking each other out and brought out the first Safety Car of the race.

In the midst of all that Roy Nissany had another blinding start in the DAMS car as he replicated his Sprint Race launch and surged into the lead.

After 5 laps, the Safety Car came in and Nissany managed to hold off the pack as the green flag flew.

The Safety Car came out again after a dramatic off for pole-sitter Jüri Vips as he went wide into Villenueve corner and subsequently ended up in the gravel trap and out of the race to cap off a frustrating weekend.

With the Safety Car on track, some drivers out in front took the opportunity to pit which left the likes of Daruvala, Armstrong and Lawson in the top three.

After that Safety Car period ended, the race settled into a rhythm with the drivers who were yet to stop waiting for the right time to pit.

Daruvala held off the advances of Armstrong with five consecutive Fastest Laps to open up a 2-second advantage in front.

Then the Virtual Safety Car was deployed after a wild accident for Roy Nissany – who scuppered an opportunity for a race win – with a heavy whack into the pit lane barriers out of Rivazza.

With the leading drivers of Daruvala and Lawson pitting, it was Pourchaire who assumed the lead of the race with Enzo Fittipaldi also on a charge as he got past Sargeant and Boschung to chase for a podium.

As luck would have it, the drivers who pitted earlier were vindicated as Lawson retired from the race with a heavy shunt which brought out another Safety Car.

The order of the race would remain that way to the flag as Pourchaire led Fittipaldi and Boschung for a podium – with Novalak, Iwasa, Vesti, Sargeant, Beckmann, Daruvala (with the Fastest Lap) and Drugovich completing the top 10.

The vital win for Pourchaire meant that he now leads the Drivers’ Championship by 2 points ahead of Drugovich with Daruvala and Lawson a close 3rd and 4th.

The next round of the championship will be nearly a month away as the teams will head to Circuit de Barcelona-Catalunya in Spain for Round 4 on the 23rd to 24th of May. 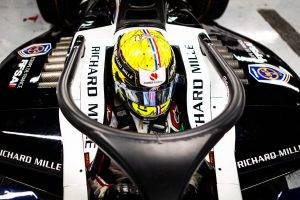