Pourchaire, who had a podium taken away from in yesterday’s Sprint race after mechanical gremlins ended his charge, managed to hold off Red Bull juniors Liam Lawson and Jüri Vips despite a late appearance from the safety car that made the final lap into a sprint.

There was tremendous excitement going into the opening Feature Race of the season after a superb Sprint Race on Saturday that saw plenty of heart-raising overtakes.

Doohan’s excellent run on a clear track had put him on pole alongside championship favourite Pourchaire, who was hoping for better luck after retiring in the Sprint because of a mechanical failure.

Vips and Sargeant would share row two ahead of Ralph Boschung and Lawson, with Jehan Daruvala hoping to go one better in the Feature from seventh on the grid.

Jake Hughes was an excellent eighth on the grid ahead of Sprint Race winner Richard Verschoor and Felipe Drugovich, who was opening for a much easier race after getting bogged down at the start of the Sprint.

Dennis Hauger’s miserable maiden weekend in Formula 2 continued to worsen after his Prema failed to start forcing him to be pushed off the grid and into the pitlane where he would start the race.

At the start, Doohan made a poor launch off the line and lost the lead to Vips, who made a rocket start and took the lead into Turn one with the Estonian resisting Boschung’s attacks on the run-up to Turn four to lead the opening lap of the race.

Frederik Vesti’s day came to an abrupt end after being tapped from behind by Cem Bölükba?? at Turn one, causing his ART to be stranded in the middle of the corner bringing out the safety car.

The safety car pulled in on Lap 5, with Vips taking full advantage of his rapid restart to pull away from Boschung, who lost second and third to Doohan and Pourchaire.

Olli Caldwell’s run in the points ended abruptly after the Brit picked up a ten-second stop/go penalty for being out of position at the safety car line. The Brit served his penalty on Lap 8, falling to last.

Boschung was losing positions hand over fist as Lawson took full advantage of the slipstream to pass the Swiss veteran for fourth.

Marcus Armstrong was next to pass Boschung, going straight past the Campos driver into Turn one.

Armstrong’s hard charge continued as he waltzed past countryman Lawson for fourth on the run down to Turn 1, whilst Boschung continued his fall through the order as Calan Williams got by into Turn four.

Ayumu Iwasa had a stellar opening stint of the race, moving himself up from plum last to seventh before his pitstop.

Bölükba?? was the first driver to pit for new rubber, with the ex-sim race rejoining at the back of the field and over a minute behind Vips.

Next to pit was Drugovich on Lap 10, but a slow left rear tyre caused him to lose some time in the pits.

Armstrong used the DRS down the front straight to waltz into third spot, with Pourchaire unable to challenge the Kiwi when he had DRS.

On Lap 13, Boschung and Sargeant came into the pits together, with the Campos team getting their man out in front whilst the American remained stationary in the pits for longer, costing him valuable track position.

Race leader Vips came in for his tyre change on Lap 14, but a slow front left lost the Estonian the net race lead and crucially putting him behind Pourchaire and Lawson.

Doohan was next to stop for tyres on Lap 15, and unlike Vips, the Australian had a clean stop which put him just behind Pourchaire. But Doohan was too eager to pass the Frenchman into Turn 1, clipping his front wing and forcing him back into the pits for a front wing change.

Armstrong and Verschoor were the next pair to pit on Lap 16, putting both behind Pourchaire and Lawson.

At half distance, Iwasa was sensationally leading the race by over twenty seconds from Drugovich and Pourchaire, with Lawson fourth ahead of Boschung and Armstrong.

With his tyres now well up to temperature, Pourchaire sailed past Drugovich into Turn 1, moving into the net race lead as Iwasa stayed out for another lap.

Doohan’s race continued to unravel as he had to make another stop for tyres ending all chances of points.

Daruvala’s slim chance of a podium faded after sustaining a broken front wing, forcing him back into the pits after making contact with Roy Nissany.

Iwasa’s reign at the front ended on Lap 19, with the Red Bull junior coming out behind Williams in eighth despite a slow left rear.

Hauger’s surge from the pits continued from strength to strength as he went past Nissany for tenth into Turn 11, with Iwasa following suit after his DAMS teammate opened the door for him.

Vips, who was now driving angry, was the fastest man out on track and was on a charge after breezing past Boschung on the run down to Turn one and closing on Drugovich as he lost second to Lawson.

Caldwell’s erratic race continued to worsen on Lap 22, as he picked up a ten second time penalty for track limits infringements.

Iwasa continued to dazzle the crowds as he moved past Williams for seventh place.

With Drugovich’s tyres beginning to fall off the cliff, Vips glided past the Brazilian into Turn one putting him back into the podium positions.

Caldwell made it a hat trick of penalties as he now received a drive-through penalty for yet another track limits breach.

Enzo Fittipaldi ended Verschoor’s race at Turn one as the Brazilian, braking too late into Turn one and slamming into the Trident, caused the Dutchman to get stuck on the exit of Turn 1.

With the safety car out to retrieve the stricken Trident, several cars elected to box for fresh tyres, but in a bizarre chain of incidents, Hauger and Williams’s cars left the pits with only three wheels attached, ending both drivers’ races and blocking the pit exit.

After Verschoor’s Trident was finally removed, the race got back underway with one lap to go, with Pourchaire leading the field over the line to begin the one-lap Sprint to the flag, whilst further back Iwasa’s incredible drive came to a sad end with a technical issue.

With the clock hitting zero, Pourchaire took his third Formula 2 victory of his career ahead of Lawson and the hard-charging Vips, who picked up a bonus point for the fastest lap of the race.

Boschung and Armstrong got some reward from the Feature with fourth and fifth at the chequered flag whilst Drugovich clung on for sixth ahead of Sargeant and Nissany.

Hughes wrapped up Van Amersfoort Racing’s first Formula Two points with ninth ahead of Doohan as he managed to get some consolation from a race that he should have won. 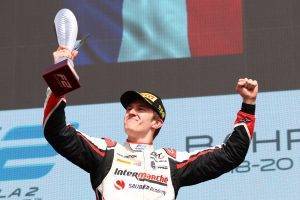