Théo Pourchaire believes his chances of graduating to Formula 1 in 2022 could be decided by the next two rounds of the FIA Formula 2 Championship.

The highly-rated Sauber junior is in contention for a possible seat at Alfa Romeo Racing, along with championship rival UNI Virtuosi’s Guanyu Zhou and former GP2/F2 champions Antonio Giovinazzi and Nyck de Vries.

However, the 18-year-old ART driver is resolved to put in his best performances possible heading into Round 5 in Monza.

“I’m fully focused on F2 right now. I know that the results are important in F2 for me, for the future.

“As usual, I need to do good results. It’s not because there is certain rumours about me in Formula 1 or anything else. To be honest, I have no idea about my future.

“We still have a full second half of season to do. But I know that I have to do two good weekends in Monza and Sochi. This can probably decide my future and we will see. If I do a good weekend already, we will have some idea. Otherwise, at the moment I don’t know anything.”

Currently, he sits sixth in the drivers’ championship, 43 points adrift of fellow rookie Oscar Piastri, despite suffering from a wrist injury sustained during the  Baku Feature Race.

Following a busy eight-week summer break in which he took part in private test at the Hungaroring with Alfa Romeo, Pourchaire seemed pleased to be returning to the Italian track at which he scored two second-places with in Formula 3 last year.

“Monza is a special place. I mean the track is amazing for racing. I think for Formula 2 with this special format of three races, we are going to have all the spectators going to great racing, which is good.”

Yet Qualifying could prove be challenge for him this weekend. The iconic track heralds the return of the notorious traffic jams, as drivers try to utilise each other’s slipstream.

“I think we are close to half a second or not because you have the perfect tow. I remember F3 last year, I did the pole but I was penalised for something similar, but I was not in fault. I was just waiting, like everyone else.

“In F2 there is less cars, but I think we can have some problem with that. I hope everyone will manage it well. But anyway, I think we need to have a tow to do take pole.”

It looks like all eyes will be on Formula 2 as the final pieces of the 2022 jigsaw are put into place.

Will Monza move Pourchaire one step closer to securing a F1 seat? 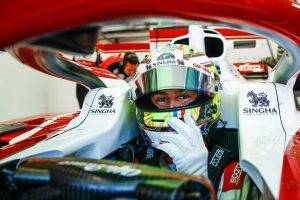