Powell Takes First Win of the Season in Hungary

Powell Takes First Win of the Season in Hungary

Alice Powell stepped on the top step for the first time of the 2022 season after a lights to flag win in Hungary. Her season hadn’t been full of the success of that she has normally had in the previous two years after only securing two podiums before this weekend.

Powell started the weekend in the best way possible after taking pole in Friday’s qualifying session. This year she’s driving for a new team in W Series (Bristol Street Motors). She lined up alongside Beitske Visser for the final round of the European outing of the season.

The safety car led the drivers for an extra lap due to the circuit still being damp from heavy rain in the morning. This took just over five minutes of the total racing time.

Nerea Martí almost lost the car completely in the damp conditions on the formation lap whilst running in third. She narrowly escaped contact with the barriers and re-joined the track under the safety car without damage.

However, this put Marta García ahead of Martí for the rolling start, but this would be investigated by the stewards. They later decided that there would be no further action.

Starting fifth, Jamie Chadwick overtook Martí by Turn 2. The championship leader had won the previous seven races and starting out of position she had already started to redeem qualifying on the first racing lap.

Quantfury’s day went from bad to worse as their two drivers came together on the opening lap. Belen García clipped the rear left of Martí’s car while trying to make a move on a wet part of the track.

Chadwick’s charge to the front of the field made an impressive move around the outside of Turn 1 to get herself ahead of Marta García.  The pair were almost three-wide as Abbi Pulling began to close in.

After gaining four places in the first half of the race, heartbreak for Jess Hawkins as she brought out the yellow flags with only 15 minutes remaining. She was spun by Emma Kimiläinen as the pair were fighting for running sixth and seventh.

Bianca Bustamente suffered a puncture on the exit of Turn 9 which caused her to spin. The rookie tried her best to get to the pits but only got as far as the pit exit.

During the incident, Chadwick overtook Visser for second position. The safety car came in with five minutes remaining, giving her the perfect chance to challenge for her eighth consecutive win.

Chadwick’s challenge for P1 didn’t materialise, despite the gap staying around half a second for the remainder of the race and Powell took the chequered flag.

After a dominant victory, she would be joined on the podium with the championship leader and Visser, who impressively held off M. García in the closing stages of the race. 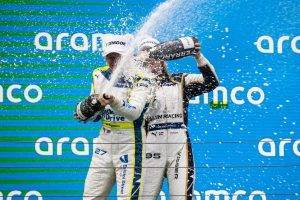