For two seasons of Formula 2/GP2 Prema had ruled the roost, with two driver’s championships in 2016 and 17 with Pierre Gasly and Charles Leclerc.

But Prema had fallen on hard times since then 2018 saw them lose ground to ART and Carlin and in 2019 the Italian team plummeted to ninth in the teams standings only ahead of Trident.

But in a golden year which saw the Italian team sweep all the junior titles around them, PREMA bounced back to do the double of driver’s and team’s titles with their cars proving.

On paper, the team had the strongest line up of all eleven teams, with Mick Schumacher staying on for his second shot at the F2 championship and Robert Shwartzman who came into the series as the reigning Formula 3 champion.

Despite the potential for inner team conflict between the two PREMA kept the situation under control favouring neither of its two stars who were chasing a Grand Prix drive for 2021.

For Mick Schumacher 2019 had been a testing season with an uncompetitive car and a poor run of luck giving the German a baptism of fire for his rookie F2 campaign where he was tipped to win the championship at the first time of asking.

2020 would be Schumacher’s last chance failure to win the championship or get the super licence points needed and the German could kiss goodbye to following in his father’s footsteps.

The start of the 2020 season couldn’t have been any worse with a mistake when chasing race leader Callum Ilott cost Schumacher an early win with the Sprint race seeing him stuck behind Nobuharu Matsushita on his way to seventh.

Schumacher’s bad luck continued into the second Austria race meeting when a fire extinguisher went off during the Sprint race causing the German to retire and lose more points in the title race.

A good weekend in Hungary settled the nerves before a couple of dire weekends in Silverstone where everything could go wrong did from being held up to qualifying by Roy Nissany before colliding with Shwartzman in the second sprint race.

After Silverstone Schumacher finally picked up momentum in Catalunya and Spa with three podiums out of the four races but still the elusive win was missing.

When the series arrived in Monza Schumacher was fifth in the championship and needed results to go his way with the gap to fellow Ferrari junior and championship leader Callum Ilott over forty points with four weekends left after Monza.

The German made yet another mistake in qualifying going off at the Variante Ascari ruining any chance of pole position and leaving him down in seventh.

But Schumacher made up for it with a lightning start which saw him move up from seventh to second at the end of lap one proved crucial as championship leader Ilott faulted at his mandatory pitstop giving Schumacher a lead that he wouldn’t relinquish to take his first win of the season.

From that race onwards the momentum in the championship swung in Schumacher’s favour with another podium in the Sprint followed by a decent haul of points at Mugello which saw him take the championship lead for the first time as Ilott and Shwartzman stumbled.

Sochi saw Schumacher increase his lead with arguably his best weekend of the season with a sublime manoeuvre on Yuki Tsunoda winning the Feature race and third in the shortened Sprint giving Schumacher a twenty-two point lead over Ilott heading into the Bahrain doubleheader.

But Ilott made ground with pole position and with Schumacher only getting a best finish of fourth meant the title would go down to the wire in the second Bahrain weekend.

But Schumacher’s already nervous driving took a turn for the worse in Qualifying after colliding with Nissany meaning the German would start eighteenth on the grid.

Schumacher fought back for sixth and fastest lap in the Feature but a bad lockup in the Sprint saw him flat spot his tire forcing an early stop, but with Ilott falling to score Schumacher took the championship by fourteen points.

Robert Shwartzman’s 2020 was filled with triumph and tragedy from the highs of four wins to losing his late father the Russian had a tough season on and off the track.

The Russian had a great start to the season with three top-five finishes in the first four races which included an emotional win in the Feature race in the second Austria meeting.

Shwartzman made it back to back Feature race wins in Hungary but the Russian only picked up four points in the next two weekends with Shwartzman colliding with Schumacher in the Sprint costing him vital points.

After a mixed weekend in Catalunya with second in the Feature but nothing in the Sprint, Shwartzman scored win number three in the Sprint at Spa but by Monza, Shwartzman was slowly falling out of championship contention and losing ground to Schumacher and Ilott.

Mugello and Sochi saw Shwartzman’s title hopes start to sink with two pointless weekends before they were finally downed in the second Bahrain weekend after failing to get pole position.

Despite the drop in form Shwartzman finished the season a high with a win in the Sprint Race in the first Bahrain meeting meaning that he would finish the season off as the driver with the most race wins with four to cap off a challenging season.

It would have been wrong to say anything other than Prema in 2020 have been a juggernaut in the junior categories and in F2 this was no exception with a car that looked quick right off the bat.

With Oscar Piastri replacing Schumacher for 2021 it would be hard to bet against Prema for the upcoming season. 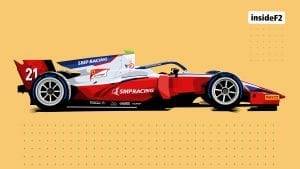