PREMA and Hauger reflect on Imola

PREMA and Hauger reflect on Imola

Despite scoring a phenomenal double podium at Imola on Saturday’s FIA Formula 2 Sprint Race, PREMA Racing experienced a much tougher day on home soil in the Feature Race, with neither driver doing as well as they hoped.

The Italian team started the weekend positively with great pace from Jehan Daruvala and rookie Dennis Hauger, who has adapted quickly to the F2 machinery, placing their cars in the top eight in qualifying.

Daruvala became the only driver from the grid to earn a podium from each round of the FIA Formula 2 season, which helped the team earn valuable points. They are currently fifth in the teams’ championship standings.

Strategy played against Jehan on Sunday, making it difficult for the Indian driver to gain positions in a race that didn’t provide many opportunities for the late stoppers due to early safety cars.

He said: “It was an interesting race. We were all on options, and at the last minute, we went for prime.”

“I was confident we could win the race, and we showed that pace, but in the end, we were just unlucky with the situation. First with the safety car and then with the Virtual Safety Car, as the pit lane was closed.”

Despite losing the chance to have a better result in the weekend’s final race, Daruvala remained confident with the quick pace he showed in Imola. He continues to look at the positives in the next round.

He added, “I think I was definitely the quickest car on track for most of the race,”

“We scored a couple of points, I’m still disappointed, but everything is hindsight in racing. I couldn’t do much. In the positives, we closed our gap to the lead, and now we head to Barcelona.”

However, his teammate Dennis Hauger didn’t have the best result on Sunday when a collision ruined his race start, marking the race’s first retirement from the 35-lap-long session.

There was nothing that the Norwegian could do when he collided with his former F3 rival Jack Doohan in his Virtuosi. As a result, Hauger ended up in the wall to the right of the grid, unable to rejoin the race:

“I had a decent launch with a bit of wheel spin, and I just followed Boschung, who was coming through.

“I thought I let quite a bit of space for Doohan, but he probably got under pressure and turned to the right for some reason. I had no chance to react, and I went in the wall, end of story.”

Both Red Bull Junior drivers will now look forward to applying their learnings in the fourth round of the season in Barcelona, starting on Friday, May 20th. 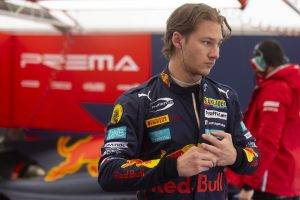