One of PREMA Racing’s drivers will become the 2021 FIA Formula 2 drivers’ champion after another pole position for Oscar Piastri. The Aussie took his fifth consecutive qualifying P1 at the season’s final round, and the additional four points now make it impossible for Guanyu Zhou to take the title.

PREMA’s Alpine Academy driver, who is looking likely to take the Formula 2 Championship this weekend, put in a stunning lap on his last attempt to, once again, take pole position and the points that came with it.

Piastri said, “Fifth pole of the year, it felt very good! We were in control for the whole session and the whole day, really.

“The car was great once again, and it’s a great way to end the year in qualifying, on top again. I’m very happy.”

The only other person who can beat Piastri to the title is team mate Robert Shwartzman.

The Ferrari Academy driver finished qualifying as the fourth fastest. As such, he’ll line up seventh for Sprint Race 1, and in P4 for the Feature Race on Sunday.

The Russian was involved in the battle for pole and finished qualifying only hundreds of a second away from the front row, but will instead start from the second row for 2021’s final F2 session.

Shwartzman said: “We ended our final qualifying of the year in P4, making a good improvement from Free Practice.

“To be honest, it was a bit of a pity because it was very close for the front row. Generally, the pace was good, and the car felt great.

“I think we could have fought for the pole, but I just made some small mistakes in my lap, which cost us a bit of time. However, P4 is a position we can fight from.

“Making points is the main target for the races, and we will fully focus on the race pace to hopefully get good results and enjoy the last three races together.”

After qualifying, PREMA Racing could sit in the comfort that they’ll take the 2021 F2 drivers’ championship. Shwartzman is now the only driver who can beat Piastri.

However, Piastri will have a lot of places to make up in the first race as he starts from tenth with the reverse grid nature of the weekend. 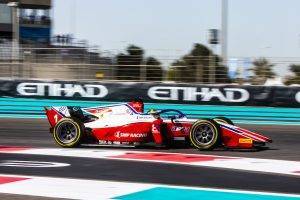