PREMA claimed two podiums on the final day of Formula 2 action in Monaco.

Oscar Piastri claimed two second places after delivering extremely consistent runs in both races. Despite struggling for grip in the second Sprint Race, the Australian managed to keep his cool and finished third, before being promoted to P2, following Liam Lawson’s disqualification.

The Feature Race saw the same results but with a flawless run. Unfortunately, the move from third to second came when teammate Robert Shwartzman fell from second to fourth because of trouble during the pit stop.

Piastri said: “We had a very solid day with P2 in the second Sprint Race and the Feature Race. I think we maximised pretty much everything we could this weekend.

“In race 2, we got to the lead early on, but we just struggled for grip. I tried to defend for the lead a bit, but it was inevitable that we were going to be overtaken.

“Then in the Feature Race, everything went well; we had a good strategy and a good pitstop. We got good points and a couple of trophies at Monaco, which is always cool. I’m very happy with our progress. It’s great to get back and have another good weekend.”

Shwartzman put in a solid recovery drive during Sprint Race 2, going from the back of the grid to tenth and taking the fastest lap.

The Russian managed to salvage some points, but the pace was more promising than the results showed.

Shwartzman said: “In race 2, we started last, and nothing really happened in the opening stages. I kept my pace as nobody was attempting to do any moves. In the end, we decided to go for slicks, which got us the fastest lap.

“The start of race 3 was good. The tyres this time were in the right temperature, and even the clutch setting was right. In Turn 1, I was side by side with Pourchaire, but I didn’t want to risk everything there, and I was aiming to play the strategy game.

“I stayed close to the lead for most of the race, but right after the midpoint, I started to lose the front left, which moved the car’s balance to the understeer side. In the last three laps before pitting, I started to lose pace and rotation.

“We had an issue with the pitstop, which happens, and we lost a lot of time. After three Virtual Safety Cars, it was hard to put the tyres back to temperature. In the end, I gained one position and got to P4, not the result I hope for, but we’ll move on.”

Prema will now prepare for Round 3 in Baku at the beginning of June. 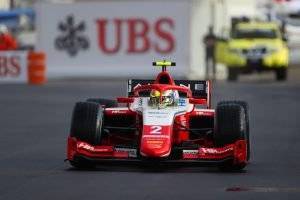