Both PREMA Racing drivers, Jehan Daruvala and Dennis Hauger, were dissatisfied with the results of a tricky FIA Formula 2 Qualifying session in Spielberg after the race stewards decided to give track limit violations throughout the grid.

The PREMA duo believe they still have opportunities to make a redemption.

Starting off the weekend with a time good enough for P15 in Free Practice, Daruvala tried to secure a high starting position for Sunday’s Feature Race but slipped to 11th behind the reverse polesitter Marcus Armstrong in the session’s final moments.

As with Saudi Arabia, the Indian driver will start both races outside the top 10. Daruvala admitted that he struggled to overcome the challenge in Austria’s Qualifying session, but remains optimistic even though the Italian team still needs to address their weaknesses:

“Not the easiest Qualifying, obviously outside the top-10, in 11th is not where you want to be.

“All in all, we still have two races left, tonight we’ll look at what we can improve, and we will try to fight tomorrow and Sunday.”

The Norwegian was disappointed with the wasted opportunity after showing significant progress in placing his car in third place in Qualifying just two rounds ago in Baku.

“Tough qualifying, obviously not what we wanted,” stated Hauger.

“I think we were quite strong in Free Practice, and we’re a bit confused overall about what happened in Qualifying. We only have to look into Qualifying today and keep our heads up.”

Last time around the iconic circuit, Dennis Hauger fought his way from 12th to become the first driver to take a first-place trophy home from F3’s Austrian weekend, before taking P3 and P2 in the weekend’s other two races.

However, he didn’t manage to convert a pole position into a win in the Feature Race, with Frederik Vesti brilliantly storming off into the lead to leave Hauger in second but leading the FIA Formula 3 championship standings.

Heading to his first Formula 2 race around the breathtaking circuit, Hauger remained optimistic about taking the challenge in the Red Bull Ring, with which he had good memories.

He added, “We will go out tomorrow knowing there’s definitely an opportunity.” 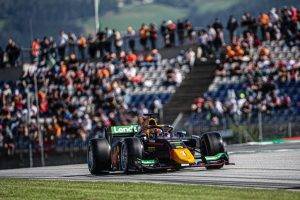