PREMA Racing came away pleased but also wondering what might have been after a mixed Saturday in Austria. Robert Shwartzman bagged a late podium after Mick Schumacher dropped down the field whilst challenging for the lead.

Shwartzman started eighth and moved up the order early on before duelling with former PREMA F3 teammate Marcus Armstrong. It was a spectacular fight for third place with the Russian emerging victorious.

However, Shwartzman was hampered in the race by worries over how the tyres would perform, causing him to struggle at points in the race.

“This is a very good result and I’m really happy,” he said. “We had a good start and stayed close to the leaders in P5. I wasn’t over pushing at the beginning as I didn’t know how the tyres would perform, so the others pulled away a bit. The team decided to go for an earlier pit-stop than the guys in front which would have been a good call. Unfortunately, there was a little delay with the front left tyre, but it happens.”

Shwartzman also mentioned the importance of scoring well on Sunday, with the Russian starting sixth in the sprint race.

“I was catching Marcus and I tried some manoeuvres, but there wasn’t much difference with the tyres at that point. Then the safety car came out, and in the end, we battled again, but being the first race, it was really important to take all the points we could,” he added.

However, it could have been a double podium for PREMA had Mick Schumacher maintained P2 following the safety car.

Schumacher’s was challenging race leader Callum Ilott he went into the gravel on the exit of the Wurth Kurve. He dropped to 13th, eventually finishing 11th and one place outside the points

The German expressed his annoyance with his mistake after the race.

“I am very annoyed with myself that I gave away a possible podium. The race had been running almost perfectly up to that point: I had a good start from fifth to third place and also got on very well with the tyres. Our strategy fit perfectly and when the safety car came out I was in a promising second place,” Schumacher said.

Despite this setback, Schumacher is hopeful he can challenge at the front from P11 on the grid.

“I still need to look on the bright side for the next races: In terms of speed we’re among the front runners.” 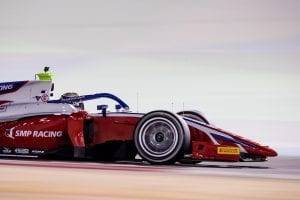