PREMA Racing ended the 2021 FIA Formula 2 season with yet another win and a double top-five finish in Abu Dhabi to take the top two spots in the Drivers’ Championship and the Teams’ Championship.

Newly crowned champion, Oscar Piastri, started the race from pole and managed to remain in control for all 33 laps.

However, his day wasn’t all smooth; contact in the pit lane forced PREMA to change the Australian’s front wing on the grid before the race.

Piastri led the way from lights out and, after starting on the softer tyres, quickly returned to the lead when those on the contrary strategy had pitted.

The Alpine Academy driver crossed the line comfortably in the lead to take his sixth win in his first and only season in F2.

Piastri said, “This year’s done, ended it with a win, which is the best way to do it.

“It was a good race, eventful before it even started, getting crashed in the pit lane, but it finished the way we wanted to, and that’s the most important thing.

“I couldn’t be happier really, thank you to the team for an awesome two years.”

In the middle of the pack, Robert Shwartzman used the same strategy to jump up to third place at the start but couldn’t save his tyres like his team mate.

The Russian eventually lost his pace in the final few laps and finished in fifth.

However, fifth was enough to secure second in the championship, also known as vice-champion, meaning PREMA took the top two spots in the Drivers’ Championship.

Shwartzman said, “We finished our fourth year together with Prema. It has been a lovely journey, and I enjoyed it a lot. Big thanks to the team for that. It was awesome.

“This year, we had a lot of difficulties coming upon us, but in the last two or three rounds, we managed to bounce back, improving quite a lot in qualy.

“We ended up P2, vice-champions, which is not bad, and I’m happy about it. Unfortunately, it’s not champions, but we lost too much in the beginning, and it was too difficult to recover.

“However, it has been a lovely season, with a lot of good things, and I really enjoyed it. I want to congratulate Oscar for his season.

“It’s now time for me to move forward. Thank you, guys; it’s been a pleasure!”

PREMA will again head onto the post-season as teams’ champions, as well as having locked out the top two of the drivers’ championship. 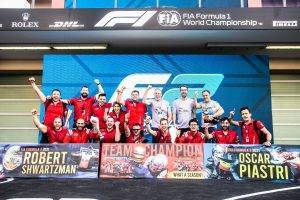