With only three rounds remaining in the FIA Formula 2 season after this weekend, the teams will be hoping to score as many points as possible. For PREMA, the 2022 F2 season has generally not gone their way, and during the Belgian Sprint Race, the Italian outfit endured another difficult session.

Jehan Daruvala had a tricky Friday in Spa, and things were set to get worse. Qualifying in ninth place for the Sunday’s Feature Race, the PREMA driver was supposed to start the Sprint Race on the front row in P2, but a mechanical issue on the formation lap meant that he was out before the race even began.

The Red Bull Junior Driver expressed his disappointment, saying, “Not really a good day. The car stopped even before the race started, I think there was an issue with the fuel pump.

“I couldn’t make it around for the start, so it’s disappointing. I’m looking forward to tomorrow, I just want a good night of sleep, and I’ll do my best.”

Things didn’t look too good on the other side of the garage either. Dennis Hauger has had a difficult start to his rookie F2 season, and his Sprint Race did not go according to plan as the Norwegian finished outside the points in P10 after starting in P11, t.

Carlin’s Logan Sargeant crashed out on Lap 11, bringing out the Safety Car, and many, including Hauger, decided to pit and opt for the Soft tyre. However, despite the added grip of his new Pirellis, Hauger could not keep up with Felipe Drugovich as the Brazilian made a late charge through the field.

Hauger said, “Tough race overall. I tried to give everything I had, but we were just lacking a bit of pace.

“We could hang on the prime but going to options, we were struggling. On one side, it was good to go to options to try to work on that for tomorrow, to do a good job and hopefully get some points.”

With more points available for the Feature Race, PREMA will hope for better fortune when it really counts. 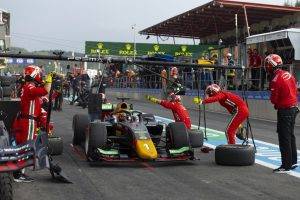