PREMA Racing enjoyed a brilliant day at Baku as they claimed a win in the Sprint Race 1.

Robert Shwartzman, member of the Ferrari Driver Academy, took-off the first race from pole and led from start to finish.

Even with a lengthy and early safety car period, the Russian stayed in control and took his first podium and win of the year.

In the Sprint Race 2, Shwartzman started from 10th and kept his nose clean, despite early trouble for the others around him. The driver finished fifth to close a consistent run in the first two races.

Shwartzman said: “It’s good to be back to victory. It took a bit of time, and I hope it is a good starting point for the championship.

“The start from P1 was good, I managed to keep the first position and straight away. The gap kept increasing and as the car was really good, and it was always improving, so that’s a great thing.

“In race 2, the start was pretty decent, and I tried to stay away from the carnage. After the three safety-car situations, I was behind the pack in P5, but I didn’t have a perfect balance with the tyres, and I was a bit slower in the corners where it’s important to have rotation.

“Basically, we stayed in P5 for the rest of the race. Anyway, it was a really positive day. Let’s hope for a good race tomorrow.”

On the other hand, his team mate Oscar Piastri didn’t have such a brilliant day. He had a rocky start but produced an impressive fightback during the Sprint Race 2.

The Australian was rear-ended in Turn 2 of the first race, launching him into another car and out of the track with damage.

Eventually, the Alpine Academy Young Driver claimed eighth and set the fastest lap to give himself three more points in the fight for the championship.

Piastri said: “Race 1 was a very short one as I was hit from behind into Turn 2. I got pushed into another car, had a puncture and broke my front wing.

“Starting from 19th, in race 2, we got a decent result and the fastest lap to secure a couple of bonus points. We struggled a bit at the beginning with getting references and stuff; I think we paid the price a little bit for only doing three corners in the first race.

“In the first part of the race, I was getting to grips with everything. Then in the middle part, we were quite good, but in the end, we didn’t quite have the pace compared to Ticktum and Lawson.

“I’m happy, it could have been a little better, but we’re in a good position for tomorrow. We know what to change and what to work on. Hopefully, we can bring home some solid points.”

PREMA hope to enjoy another brilliant day tomorrow. They will take part in the Feature Race with Shwartzman and Piastri, starting from 10th and third, respectively. 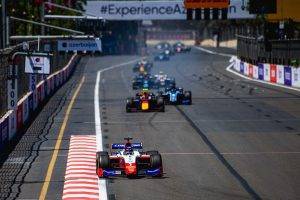