PREMA scored a podium with Mick Schumacher on Sunday, but it could have been more if not for a late crash.

Mick Schumacher started second on the grid, only his team mate in front. Robert Shwartzman had an excellent start and led Schumacher for most of the race.

PREMA looked set for a 1-2 finish when Schumacher went for a move on the outside of Brooklands, but the team mates made contact. Shwartzman dropped down the order to 13th with damage while Schumacher tried to fight for the lead but had to settle for second place.

Mick Schumacher said: “It’s good to be back on the podium again – and with the fastest lap of the top ten as well.

“Since last week, our car is much more tyre-friendly, so it’s the team that deserves the thanks. The duel with Robert shortly before the end was an unfortunate race incident.

“From my point of view, I was relatively clearly in front when I turned in, but that’s part of motorsport, too. Even though we weren’t quite able to get the maximum yield as a team, today’s race makes me very confident for Barcelona.”

Robert Shwartzman said: “The start was great, and I was first straight away. Mick was behind and trying to make a pass, but at some point, he lost his car, so that allowed me to increase the gap and set my pace.

“I then started to struggle with the rear left tyre, which then normalised with some help from my driving, but suddenly the front left was degrading.

“Then in the final laps, Mick went for the outside, and we made contact, damaging my front wing. Then the final laps were just a nightmare, and I finished far away in P13.”

PREMA will not want a repeat when they head to Spain for round six of the Formula 2 championship. 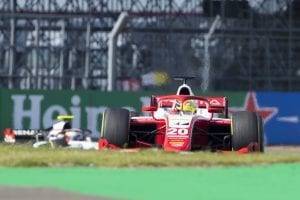