Prema had an eventful Qualifying session in Bahrain as Formula 2 started its final round of the season.

The Italian team opted to wait for a clear track before heading out on the first set of tyres.

By their second set, there was a red flag which complicated their session even further and turned the final stages into a four-minute shootout.

Robert Shwartzman had a positive session on the brand new track configuration with a P4, maximising the chances he had with the second set of tyres to deliver a high-quality performance.

Unfortunately, the Russian was impeded on his final attempt, but his pace was good enough for a second-row start.

“We had an interesting qualifying here on an interesting track and not a bad result with P4. Generally, I’m quite happy with how it finished, but I think we could have done better. I made a mistake in Turn 6-7, which I think comprised my lap by one and a half tenth that I lost to Tsunoda. A bit unfortunate because I was hoping for a bit better result. P4 is still a good place to fight from though. On the last lap, what Mazepin did to me was not right. Now it’s full focus for tomorrow, the target is to have a really good start and then be patient and try to do the best job possible, maybe finish on the podium or even a win if we can.” – Shwartzman.

Championship leader, Mick Schumacher had a more challenging day as he lost his final chance to improve because of contact with another driver.

The German was forced to settle for 18th place and will be in need of a comeback drive in the Feature Race.

“Overall, there’s no talking around, a disappointing day.  I was hoping for a lot since free practice had worked really well. But it is a very difficult track, and we didn’t manage to make something out of Qualifying. Now we can only look ahead and do a better job tomorrow. I have good race pace, and starting from the back I will definitely look for any opportunity I can get. I will try to work my way up as hard as I can. My goal is obviously to finish ahead of Callum, and that’s all I focus on right now.” – Schumacher.

Schumacher will want to make his way through the field as quickly as possible in the hopes he will have a good weekend, while Shwartzman would like to continue his winning form. 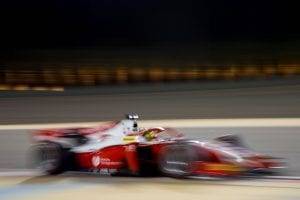