PREMA Have ‘Lots of Opportunities’ to Rebound at Spa

PREMA Have ‘Lots of Opportunities’ to Rebound at Spa

PREMA Racing’s Jehan Darvuala and Dennis Hauger are eager to turn around a difficult run of form in the FIA Formula 2 Championship with the resumption of racing this weekend at the Circuit de Spa-Francorchamps in Belgium, home to Round 11 of the championship.

Daruvala slipped from third in the championship to fifth over the course of July, taking only one podium, a second place at Le Castellet, from the past four rounds.

At both Round 8 at Spielberg and Round 10 at the Hungaroring, Daruvala failed to score a single point, allowing Logan Sargeant and Enzo Fittipaldi to streak ahead of him in the championship.

Daruvala has a strong record at Spa, taking pole position and victory on his 2018 visit to the circuit in European Formula 3 and scoring his only FIA F3 pole position there in 2019 with PREMA.

He also went to Spa in 2020, his rookie F2 season, but failed to score points after contact in both races.

“I’ve had a great summer break and am looking forward to getting back into it,” Daruvala said.

“Spa is my favourite track of all! The track has been resurfaced; there are some new bits. I am really looking forward to trying it. It will be very interesting.”

Hauger’s ‘hopeless’ Hungaroring round began with a spin at the end of free practice. Though qualifying eighth was an improvement after three consecutive Qualifying results outside the top 10, Hauger was taken out of the Sprint Race, which he started third, at the first corner in a three-car incident with Sargeant and championship leader Felipe Drugovich.

The PREMA rookie set the fastest lap in the Feature Race after a late pit stop but earned no points for crossing the line 19th as the last car running. Having risen to fifth upon his Feature Race win at Round 6 in Baku, Azerbaijan, Hauger has now fallen to 12th in the standings with 67 points.

“I definitely aim to get a good Qualifying. That’s been a big problem recently,” Hauger said about his goal for the Spa-Francorchamps weekend.

Concerningly for Hauger, Spa was the worst round in his title-winning FIA Formula 3 campaign last season. Starting 14th for all three races, the Norwegian only managed to take six points from the weekend as then-rival Jack Doohan took two victories and slashed Hauger’s hefty championship lead.

“Spa is a very long track. It’s a track where you’ve got to maximise slipstream and keep the lap clean. But also, there are lots of opportunities in the races.”

Qualifying for Round 11 begins at 18:30 local time on Friday. 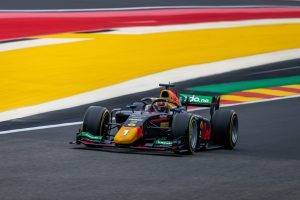