PREMA Have Mixed Emotions After Second Sprint Race in Bahrain

PREMA Have Mixed Emotions After Second Sprint Race in Bahrain

The 19-year-old made a last-lap overtake on UNI-Virtuosi’s Guanyu Zhou to claim the win in the weekend’s second Sprint Race.

The Alpine Academy driver started on the hard tyres, before changing to the softs during a late safety car.

At the restart, Piastri kept up his pace and took the lead with an impressive overtake to secure victory.

Piastri said: “It’s been the craziest win I had in my life. In the beginning, we were struggling with the hard tyres, and honestly, I was also not driving good enough as I’m still learning the changes in grip.

“Then we got the pit stop, and I have to credit Prema for that decision. At the end, with the soft tyres, I was able to pull some good moves and here we are! Race 1 was positive, too, and we showed lots of positive signs.”

Meanwhile, team mate Robert Shwartzman had more of a rollercoaster during the two Sprint Races.

The Russian made it from 11th to fourth with a positive drive in the first race. However, contact in Turn 1 put the 21-year-old out of contention in the second race.

Shwartzman said: “In race 1, we had a positive start considering our unfortunate qualifying yesterday. I made a good decision on where to place myself in turn 1 and fought with the other drivers gaining some positions.

“The beginning of the race and the first half were good balance-wise, but then in the final part of the race, an early lock-up made the car very critical to drive, and I lost quite a bit of performance and balance. The final laps were very tricky, but I managed to keep P4.

“In race 2, I think the launch itself was quite good. I was side-by-side with Lundgaard, and there was not much space on the left, so I couldn’t do a proper entry.

“I didn’t really over push, we were still side-by-side going into Turn 1, but suddenly Ticktum came in on the complete opposite line as he was trying to make a crossover.

“I couldn’t see him on the left, and when I saw him was at the moment of the contact. I think it was unavoidable on my side, and it’s a pity because we had a great opportunity to fight for the podium. I tried my best, but it is what it is.”

With two Sprint Races complete, PREMA will be aiming for another win, this time in the Bahrain Feature Race.

Will Piastri and PREMA hold on to their leads in the drivers’ and teams’ championships after today’s Feature Race? 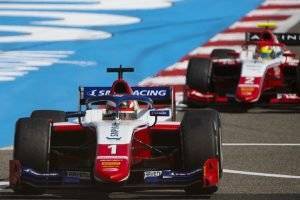