Qualifying was not the easiest for PREMA in Mugello.

The Italian circuit provided a challenge for all the Formula 2 drivers during Friday’s Qualifying session.

The field was incredibly tight. The top 14 drivers were within 0.5 seconds of each other in an action packed event where changes in positions occurred throughout.

By the end of the session, Robert Shwartzman posted the ninth fastest time.

The PREMA driver showed good potential and initially looked to settle for a fifth row start in Saturday’s Feature Race.

However, with DAMS reserve driver, Jüri Vips, receiving a three-place grid-drop for impeding Louis Delétraz, Shwartzman now starts in P8 on the fourth row of the grid.

Shwartzman said: “It was not the best result for us for sure. Today we didn’t have enough pace to be on top, and everybody was very close to each other. I did a few mistakes in my best lap, probably accounting for one and a half tenths. While it would have been difficult to get P1, maybe I could have done a better job. We need to analyse why we lose a little bit in every sector to be ready for tomorrow. It’s going to be a really challenging race, with high degradation. We need to play it smart. Hopefully, the result of the race will be better than in qualifying.”

Meanwhile, Mick Schumacher took 15th place after an early trip off the Mugello circuit and through the gravel. The German was able to improve with his second set of tyres despite having damage to the car.

Schumacher said: “Obviously P15 is not what I would call a pleasant result. In my first run, I opened the steering a bit too early in turn 11 and ran wide, which caused some damage on the car. Still, starting 15th is something that I consider to be a challenge, and I am certainly willing to take it. We’ve seen in the past that it is very possible to get a good result even without a proper starting position. Race pace and tyre management will be key tomorrow, and we are on a track where a lot can happen within these 33 laps. I’m looking forward to the race, and I’m keen on improving our position.”

PREMA will hope that their drivers show good pace and move up the field to help their Formula 2 Drivers’ and Teams’ Championship campaign. 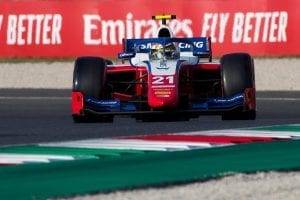