PREMA hopeful for Feature Race after scoring another 1-2 podium

PREMA hopeful for Feature Race after scoring another 1-2 podium

PREMA Racing finally delivered their first win of the season. Dennis Hauger proudly took his maiden F2 victory in Monaco’s Sprint Race alongside his teammate Jehan Daruvala in second, which is precisely what the team needed to catch up with other teams in the standings.

This is the first time the Italian team struggles behind the top three, as they currently sit fifth in the standings, only three points shy from Hitech, who’s now in third, and 35 points behind the leading team MP Motorsport.

However, both drivers managed to deliver strong results from the weekend in the famous Monte Carlo, as one of the teams who finished outside the top five once, which gave them hope to have a good Feature Race starting from eighth and ninth position respectively.

Hauger’s first time racing in the iconic venue ended brilliantly, as he cruised to the lead from the front row when the reversed polesitter Jake Hughes stalled into the line.

The Norwegian driver remained unbeatable from that point on, dominating the way to the finish despite a pesky safety car situation to celebrate his maiden win in one of the world’s most legendary and iconic venues.

“First time here and to get the win it’s a really nice feeling. I got a decent start while obviously, Hughes stalled.” Stated Hauger, “From that point, I managed the tyres and the safety car as well.”

“In the beginning, I struggled a little bit in getting everything into temperature, but from that point on, I felt the pace was really good, and I could really push.

“Overall I’m really happy with the day and I think we can do a good job tomorrow as well.”

His teammate, Daruvala, could almost say the same about the race. He continued to collect his podium from each round except for that one time when he missed the opportunity to take home any trophies from Barcelona.

Overtaking was at a premium in Monaco, which helped the Indian driver finish second as soon as disaster struck Hughes, even though Marcus Armstrong tried to charge him a few times. Still, he managed to keep the Hitech driver behind him.

He said, “Overall, I had a good start. I had to get around Jake, and I was quite strong until the safety car. We just have to look in terms of tire warming because I think I damaged my left front tire after the safety car.”

Last time out in Monaco, Daruvala wasn’t having the best result when he was forced to retire in the early stages of last year’s Feature Race. This time he will try to turn fortunes around in the principality.

“Our car is good, tomorrow there could be good opportunities maybe even with the mixed weather. I’m looking forward to using my experience and moving up the field.”

Following the Feature Race schedule, both drivers will try to strike the same results at 9:50 AM local times before heading to Baku in two weeks. 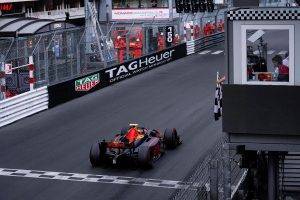