PREMA Leave Jeddah on a High

PREMA Leave Jeddah on a High

PREMA drivers Dennis Hauger and Jehan Daruvala ended a tough FIA Formula 2 race weekend in Jeddah on a high, with Daruvala taking home a third-place finish and Hauger ending the race in sixth.

After some difficulties during Qualifying and the Sprint Race on Saturday, the team’s performance during the Feature Race on Sunday allowed the PREMA Racing team to leave Jeddah on a high.

Hauger said that it was, “Nice to end on a decent pace before the Barcelona test and Imola.”

Both PREMA drivers seem relatively optimistic, yet careful and critical, as they reflect on their performances, pointing out several difficulties they encountered throughout the weekend.

When asked about his Feature Race performance, Hauger said: “I think we lost some time at the beginning of the first stint, but otherwise, it was not too bad.”

As for Daruvala, the Indian seemed rather pleased with his strategy on Sunday.

“I think our strategy worked quite well. I wanted clean air as we knew that the car was really good in clean air, so we made the call to box early, and it paid off. We had a great pace after that, and in the end, it is what gave us the podium.”

Hauger, who used a different strategy than others in front still managed to leave the circuit with a top-six finish.

“We were on a different strategy than most, but [I] did my race and ended P6, which is not too bad.”

Daruvala mentioned: “After the issues in qualifying, to be seventh and third in the races was damage limitation.”

When looking ahead to the next rounds, Daruvala highlights a point of improvement. He said, “Going from 14th to 3rd gives me a lot of confidence, now we need to start more at the front.”

Both PREMA drivers will return to action in the third round of Formula 2, which will take place in Imola at the end of April. 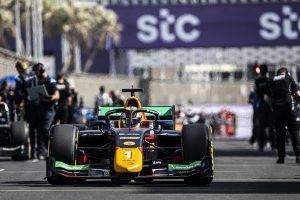