Prema Racing took a stellar win and another equally outstanding double podium finish in the Formula 2 feature race in Hungary.

Despite a tough qualifying, Robert Shwartzman claimed his second race win of the year to increase his championship lead further. The 20-year-old Russian started from 11th but used a different strategy to many of his competitors. After starting on the medium tyres, he stayed on track and managed the degradation exceptionally well. He then pitted for the softs and charged to the lead, easing into the distance.

Shwartzman said: “I’m super happy to have won with such a huge margin. Big thanks to the team for the strategy.

“We risked, but it was our decision because we knew that it would have been tough to pass. We needed to do something different, and it worked out great!

“I also want to thank SMP Racing and the Ferrari Driver Academy as well as my dad, of course. I hope there will be more thank you days like this! It was a bit of a strange race. The start was mega, one of my best and for the best in F2.

“Exiting turn two, I was already in P6, which became P5 due to retirement. After the safety car, my goal was just to keep up with the tyres, nice and steady. I wasn’t as fast as the others, but then they pitted, and I could run alone on the track.

“I was surprised and happy that the others were on the same pace as me or slower. When I pitted, the team did a great job, and despite a big lockup, the tyres gripped really well. I passed everyone to P1, and I managed the degradation until the end.”

Of the drivers who started on softs, Mick Schumacher was the only one to make it work.. The 20-year-old German delivered a phenomenal drive to take the final step on the podium.

Schumacher said: “I am very happy to be back on the podium here in Hungary. We knew that we had a car that could be at the front and it’s a delight that we were able to prove that on track.

“I had a great start and was even in the lead after the pit stops. But Robert [Shwartzman] and Nikita [Mazepin] were on the faster strategy, so, unfortunately, I didn’t have a chance to keep them behind me.

“Tomorrow we will start the race from sixth place, and we want to follow up directly and show the quality of our package once again.”

The Ferrari Driver Academy pairing is now set for an action-packed sprint race with the reversed top eight grid. 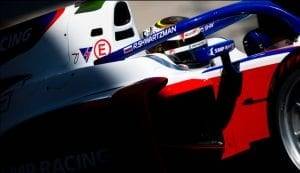