Piastri pulled together a brilliant lap to take the pole position in Silverstone for the fourth round of the F2 Championship.

The 20-year-old Australian quickly started as he immediately topped the field on his first flying lap.

While he did not improve on his second run, his initial lap time stood on top for the rest of the session as a red flag stopped running with just over two minutes left of the session.

Piastri said: “Pole in Silverstone! It’s been a while since my last one, but I’m super happy.”

“I think we had the pace all day today; we were really strong in practice as well as in quali, obviously.”

“I’m glad that my first run was good enough because I made a big mistake with the second set of tyres.”

“Now we have to fight back from P10 in race 1, but we’re on pole for the Feature Race, which is what we’re here for.”

Unfortunately, the red flag was caused by Robert Shwartzman, who ended up in the gravel at Stowe.

The incident prevented the Russian from improving his position; his best lap at the time was enough to secure seventh and a second row start for the first Sprint Race, giving him a nice chance to score points.

Shwartzman said: “It has been an up-and-down qualifying session. We definitely improved the pace from free practice, and the car seemed really good, but I’m disappointed with the result because P3 or P4 was doable.”

“The first stint was not bad despite a couple of small mistakes. Then when I was in lap 2 of the second stint, I was two tenths faster already; I lost the rear and spun, which ended our session.”

“It was unpredictable, maybe due to the wind or the tyres losing grip. We have to look into the data and prepare for the races.

“It will be tough to manage degradation, so we need to do a good job.”

Tomorrow’s first race will see Piastri face a challenging run starting the reverse grid from tenth, while teammate Shwartzman will start from third in the Sprint Race. 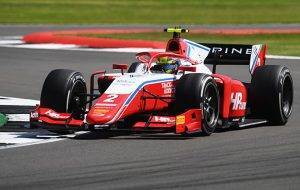