Prema Racing Hope for More From the Races

Prema Racing Hope for More From the Races

The Formula 2 qualifying session in Hungary was a wet one, making it a difficult afternoon for the Prema team.

Despite the conditions, Mick Schumacher was able to secure fifth, although Robert Shwartzman could only manage 11th.

Schumacher banked on an early fast lap to round out the top five, putting himself in a good position for Saturday’s feature race. Schumacher won on Sunday last year here and will be looking for another great performance.

Mick Schumacher said: “P5 is a decent starting position for tomorrow’s race. Again, our car felt really great to drive and was well on track even under difficult conditions.

“It’s a pity that the session was red-flagged because I would have liked to attack one more time with new tyres. But most importantly, I think that we will be competitive tomorrow – no matter if it’s raining or dry.”

The session was brought to an early end after Jehan Daruvala spun, bringing out the red flag.

Shwartzman was preparing for a final run but was caught out by the decision not to restart. He eventually finished the session in 11th place.

Robert Shwartzman said: “It’s disappointing to begin the weekend this way. In free practice. We did not turn a single lap because of the weather.

“Then we went into qualifying, and in the first stint, there were yellow flags that disrupted the laps. So, we stopped, and at the moment the track began to improve, so the others made big gains.

“When we went out with the fresh tyres, the red flag came out so we could not improve, which is a bit of a shame because there were still times. It’s sad to start so far back as in Hungary it’s very difficult to overtake, but I hope we will be able to fight back.”

The Prema duo will be hoping for better in the feature race on Sunday, starting at 16:45pm local time. 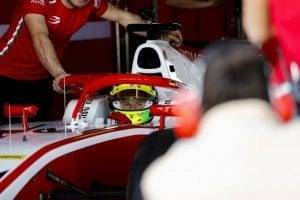