PREMA Racing completed the Silverstone round of Formula 2 with a podium in the weekend’s final race.

Oscar Piastri claimed a hard-fought podium after a rough start from pole in the Feature Race. However, right after the pitstop, he dropped to third as he struggled with the tyres.

After a long run behind a car that still had to pit, the Alpine driver managed to defend well to keep third, eventually celebrating with a podium.

Piastri said: “We got P3 in the Feature Race, which was a difficult one. But, unfortunately, we just didn’t have the same pace that we had yesterday.”

“When we caught Nannini in the middle of the race, we didn’t have the pace to pass him, which was surprising and rather disappointing.”

“Even after that, the final laps put my defensive skills to test. Nevertheless, we still scored solid points, walked away with another trophy and the championship lead, so overall it has been a great weekend.”

“Not the way we wanted to end it, but we showed well what we are truly capable of, and I want to thank the team for all their work.”

Robert Shwartzman, who won race 1, got another points finish with a fifth, claiming two positions from where he started.

The Russian also experienced a lack of pace and tyre issues but still managed to maximise his result to score some good points.

Shwartzman said: “We ended the Silverstone weekend by collecting some good points.”

“We improved from last year; we maximised the loss we had in qualifying, and today, I think we did everything we could with P5.”

“We struggled with the pace, and I think Oscar had the same issue. Nevertheless, the start was really good, and I gained two positions in the first lap.

“However, from the beginning, I had no pace and I was struggling with the tyres; I had low grip and traction.”

“We pitted as soon as possible to get rid of the option set and see if we could improve on primes. Afterwards, I tried to keep the pace but soon started losing tyre grip again.”

“From that point, it was driving to survive, always on the edge. I was holding the pack, and there was a lot of pressure on me, but we finally managed to bring it to P5.

“We need to understand what the issue with the tyres and the lack of pace was. We will work on that to prepare for Monza; let’s hope for a good weekend there!”

PREMA Racing leave Silverstone with a 37-point lead in the teams’ championship, while Piastri leads the drivers’ standings, with Shwartzman not far behind in third place.

PREMA now have a long wait until the next round of the Formula 2 championship when the series returns to Monza in September, where the team will hope to increase their lead in both championships. 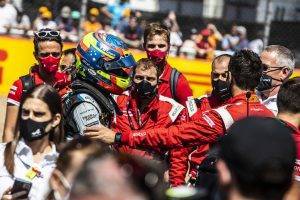