PREMA Reach the Podium in Monza

PREMA Reach the Podium in Monza

Sprint Race 1 saw Shwartzman pull off a recovery drive to get from 12th to sixth, despite a penalty for track limits demoting him from third.

The Russian aimed for more of the same in Sprint Race 2, and he eventually secured third place with a bold move on the inside of Ascari.

Shwartzman said: “We could have got two podiums today, but officially it’s only one.

“I’m happy but at the same time disappointed because qualifying yesterday was a complete mess, and today in Race 1, we got a podium taken away.

“The start was really good. There was a lot of fighting going on, and the target was only to get through.

“I did some overtakes before the first safety car, and although the re-start was a little unexpected from the car in front, I felt that the car was really good.

“I was getting through the field when we got a VSC that turned into a safety car, but we had a very positive race.

“Then we got into P3 in Race 2. I had a really good start, and I was trying to repeat what we did this morning, but I kept getting blocked, and I was not willing to take that risk, so I backed down a bit.

“Tomorrow, we will start pretty far, but we have pitstops, a good pace and a lot of motivation to fight back.”

Piastri also had another good day after securing pole position yesterday. He started from the fifth row in the first Sprint Race as a result. However, he managed to stay clear of any drama to eventually claim fourth.

In Sprint Race 2, the Australian finished seventh together with securing the fastest lap to keep his championship lead.

Piastri said: “We got P4 in Race 1, a very, very eventful race with quite a lot of crash avoidance which kept things interesting.

“Making up six spots from our starting position was pretty solid, but it could have been a bit better. Regardless, it was still a good race.

“We kept it clean and scored good points good points, which was the aim.

“I think it was a very different race from the first one as there wasn’t that much action, especially in the DRS train it was really tricky with the hotter temperatures.

“Being overtaken by Pourchaire wasn’t ideal, but then I got it back, and I managed the fastest lap as well, which is always handy.”

PREMA will hope that tomorrow’s Feature Race will bring another podium with Piastri starting from pole position, while Shwartzman will start from down in 12th. 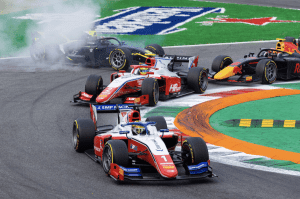