After a long break, Formula 2 and Prema will finally return to action in Bahrain at the weekend.

Both Prema drivers, Mick Schumacher and Robert Shwartzman spent most of the break between Sochi and Bahrain at home with their families and making sure they are physically prepared for the final two rounds of the Formula 2 season.

With so many races consecutively, it can be quite tough for the drivers mentally and physically, so a break was needed for the drivers. Shwartzman saw the break as a “positive, especially on the mental side”.

Unlike all the other rounds of the season, the drivers and the team have experience around the track on the new 18-inch Pirelli tyres, while they were at the track for the preseason test. However, the team focused more on understanding the tyres than on race pace and qualifying pace.

However, as there has been no racing at the track for a while, the drivers are worried about the track being dirty, especially over the first weekend at the track. There is also a new outer track layout for the second weekend at Bahrain that neither Schumacher nor Shwartzman have driven around.

Both drivers are in with a chance of the Drivers’ Championship with Schumacher leading and Shwartzman 51 points behind in fifth with 96 points left to claim. There’s still a lot of points left to play for so any of the top six could still be in with a shot of the championship everything is still open.

He started the year off well but since Mugello Shwartzman seemed to get all the bad luck at Prema.

Mugello saw something on the Russian driver’s car break, and he had a variety of other issues in other races that “basically influenced” his results. But he still has time for his form to change in the last two rounds in Bahrain with the time off giving him a chance to recharge himself and get ready for the final doubleheader.

Robert Shwartzman said: “There is a lot of strong drivers and competitors. For sure the ones who are challenging for the championship are the main contenders, and I think the strongest guys there are. I mean it’s probably going to be them so us six.

“The strategy is to finally do a good, a really good, qualifying and after that just do a good start and do a great race. No mistakes just deliver the results there and repeat the same thing in the other three race starts.”

Shwartzman also got the chance to drive a Formula 1 car for the first time during the break between Sochi and Bahrain. About the experience, Shwartzman said: “It was the first day of my life in a Formula 1 car, it was amazing, and it was very, very nice. I enjoyed every second of it. What else can I say, I mean the car feels fantastic, and I was just very happy about it, very positive. Hopefully, I’m going to drive it again one day because it was a really good experience.”

Schumacher has been in good form during the past few rounds and will want to carry on his momentum for the final two rounds of the season in his hopes to claim the Driver’s Championship.

While some of the drivers were in F1 cars during the small-time off, the German driver didn’t drive on a proper racetrack. However, Schumacher was supposed to take part in an F1 practice session at the Nürburgring, but because of the bad weather, he couldn’t take part. Despite not getting any track time, the Ferrari Academy driver gained knowledge of the meetings and the daily life of a driver at the track and the changes that have been made due to Covid-19.

Schumacher will want to focus on himself and the team in Bahrain so that they can have the best possible car and will want the team to work as well as they did in the few races so he could go for the wins.

Mick Schumacher said: “To be honest you cannot really judge if you lost focus or not because that’s something you will notice when you’re back at the race weekend. For me personally, I feel like I’m still very much in the right mindset and very much in the right rhythm that I left Sochi in. Obviously, the answer, I won’t have it until I arrive in Bahrain and do the first free practice.

However, the only way to know for sure whether the Prema drivers are on form will be after qualifying in Bahrain once everyone has had the chance to get some competitive running in.

Let us know your thoughts @F2inside on Twitter and join our ever growing community of Formula 2 fans!Image 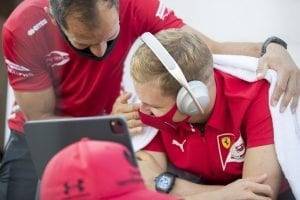