Mick Schumacher claimed his second win of the season for PREMA, extending the lead at the top of the championship.

After gaining positions on the first lap, the German made it to second and opted to pit early for Mediums.

Schumacher managed the tyres well then made an excellent pass for the lead on Lap 19. The 21-year-old showed good pace to keep the lead out of reach from everyone else.

Schumacher said: “The race could not have gone better. My start was good, the pit stop super-fast, the balance of the car mega and the tyre management spot on. Many thanks to my team for making my second victory of the season possible! We are simply very consistent at the moment, which makes me incredibly happy. It’s a lot of fun, and I’m already really keen on getting back in that car tomorrow.”

Robert Shwartzman had a more frustrating day at his home event. A communication error within the team cost Shwartzman a chance to score points.

Despite starting seventh, the Russian found himself caught in the middle of the pack after being pushed slightly at the start.

Unfortunately, the pit stop was a slow one for Shwartzman, as Schumacher pitted in the same lap and they double-stacked. The last-second decision led to a compromised strategy and overall race.

Shwartzman said: “The start was good, but I didn’t manage to get into the right slipstream right away and lost a bit of smoothness. In Turn 2, I was pushed wide, so I found myself down to P9, and at that point, it was difficult to try and do something because the pace was too similar from one car to the other. Then there was the slow pit-stop which eventually forced me in a pack where everybody was slower and on cold tyres. I tried to fight as hard as I could to get back, but that took a toll on the tyres, and I ended up losing places and taking P11.”

Today’s win gave PREMA their fifth of the season as they increase their lead in the Teams’ Championship.

They hope to increase the gap over the Uni-Virtuosi team in tomorrow’s Sprint Race as their drivers start eighth and 11th. 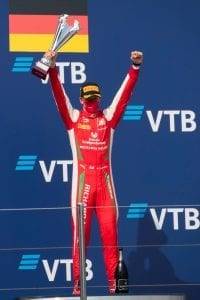