Reigning FIA Formula 2 Team champions PREMA are well-positioned for the two races in Azerbaijan this weekend after a red flag interrupted qualifying on the streets of Baku.

Dennis Hauger, who took his maiden F2 win in Monaco last time out, used the tow to secure third on the grid, while team mate Jehan Daruvala could manage only the eighth fastest time.

In an interesting quirk of the weekend structure, PREMA will have their cars start third and eighth in both the Feature and Sprint Races.

Hauger, 19, was pleased with a “better qualifying”, adding: “We had a very good tow with the position we had, so we just tried to maximize that.”

The reigning Formula 3 Champion is under-investigation for an unsafe release in the pit lane, following the late red flag as the drivers returned to the track, after Ayumu Iwasa had crashed in his DAMS.

For Indian driver Daruvala, eighth was not the result he was hoping for as he sought to close his 60-point gap to series leader Felipe Drugovich.

The 23-year-old said: “It was a really messy qualifying, but the first time I set was about one tenth off the pole, and with the second I was really close as well. I’m one and a half tenths off Dennis and he’s in P3.

The Red Bull Junior Team pair, who scored a one-two finish in the Monaco Sprint Race, were both optimistic about their chances over the weekend.

Norwegian Hauger said, “A lot of things can happen in the race, so I’m looking forward to it,” with Daruvala adding, “We start from the second row tomorrow, so we are in a good position to score some points.”

Daruvala will be aiming for big points to close the gap on Drugovich, who tops the drivers’ championship, while Hauger will want to build on his Monaco victory. 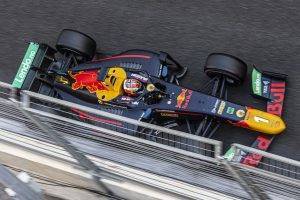