Prema’s Bahrain Podium a “Good way to start the season”

Prema’s Bahrain Podium a “Good way to start the season”

Under the floodlights in Bahrain, Prema kicked off their FIA Formula 2 year in fine fashion, taking home P2 & P9 in the Sprint Race, with both Jehan Daruvala and Dennis Hauger advancing through the field.

Daruvala started 4th, but rocketed up to second off the line, eventually falling to third after battling Ralph Boschung. However, not to be deterred, he kept himself competitive, and eventually retook P2 on Lap 16, showing enough pace to gain on race winner Richard Verschoor after the pass.

Speaking of the podium, Daruvala said his performance was a “Good way to start the season,” and that “P2 is a decent start,” for his 2022 campaign.

However, there still are a “few mixed feelings” from the Indian, as “A small mistake on my side before the end, after the VSC took us out of the fight for the win.”

Nonetheless, his attitude towards the Feature Race remains positive, stating that his 7th place start is “a great opportunity to try to move forward with another good race.”

For Dennis Hauger, it was a 15th place start, after a qualifying session with mistakes from the Norwegian. This was no deterrent for Hauger, who got stuck into the challenge of Formula 2, carving his way through the pack to come home 9th, just shy of a maiden point.

Hauger said that “The start was really good,” however, he also “got a bit stuck on the inside,” heading into Turn 1. He also expressed a bit of regret over his racing, stating that “If I had gotten past Nissany earlier, I think it could have been better.”

Overall, he called the day “a step in the right direction and a learning experience,” and that “it’s now about making another step tomorrow and bringing it forward to the next weekend as well.”

With these results, Prema sits 3rd in the Teams’ Championship, with Daruvala & Hauger 2nd & 10th, respectively, in the Drivers’ standings.

Tomorrow, the Feature Race offers more points opportunities, with Daruvala starting from 7th and Hauger further back in 15th. And with 32 laps ahead of the drivers and a mandatory pitstop, it’s shaping up to be an exciting race for the field. 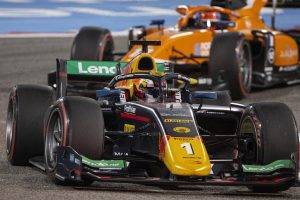