The race was red flagged and abandoned by Race Control after a crash between Jack Aitken and Luca Ghiotto on Lap 7 caused the race to be stopped.

Starting on reverse grid pole, Guanyu Zhou had a perfect launch off the start line.

Aitken made a good clean start attempting to go around outside of Zhou in a move that didn’t stick.

There was contact for Uni-Virtuosi driver Callum Ilott at the back who escaped unscathed.

A determined Formula 2 Championship leader, Mick Schumacher, stealthily sped up to fourth from eighth before the end of the first lap.

The PREMA driver was determined to extend his Championship lead.

Aitken and Nikita Mazepin ran wide squabbling over P2. The British driver was hoping for a good result today after a quiet season.

Guilherme Samaia put himself out of the race by leaving the track and bouncing back on, making contact with Jake Hughes.

The incident launched the Virtual Safety Car whilst both cars were retrieved.

Schumacher took third place from Aitken on the race restart after the Virtual Safety Car ended.

Jehan Daruvala in the Carlin car left the track as he attempted to take Aitken and had to weave through the bollards to rejoin the track.

Another attempt saw him rejoin without adhering to race direction. He would undoubtedly get himself into trouble with the Race Stewards.

Marcus Armstrong also left the track from P10 and rejoined without incident.

The battle for the lead on Lap 7 was between Zhou and Mazepin. The Russian stayed within a second of the Chinese driver but couldn’t get close enough to pass.

Aitken and Luca Ghiotto made contact and both left the track on Lap 7, crashing spectacularly into the barriers.

Both cars, completely destroyed, were out of the Formula 2 Sprint Race.

The session was immediately red flagged, suspending the race. All drivers returned to the pit lane to await a restart.

The accident would be investigated after the race.

Ghiotto climbed out of a completely destroyed car, leaving marshals with a blazing fire to extinguish.

Aitken’s car had embedded itself into the barriers, nose first. Thankfully, both drivers walked away with no injuries.

While the session was suspended, Felipe Drugovich and Daruvala both received a time penalty for leaving the track at Turn 2 – gaining a track advantage.

Ilott benefitted from this.

While drivers were out of their cars, Race Control took the decision to end the Formula 2 Sprint Race early.

Half points and a classification for remaining drivers was given, meaning Zhou took his first win in Formula 2.

Mazepin, wanting the opportunity for a home race win, had to settle for second.

He proudly took the second step on the podium draped in the Russian flag as a jubilant home crown could be audibly heard.

Schumacher, who looked to challenge the top two for the race win, had to settle for P3.

Despite his car being in peril by the side of the Sochi circuit, Aitken classified in P4 under the count-back rule – his best result of the season.

With his car in pieces and covered in extinguishing fluid, Ghiotto classified in fifth place.

Ilott scored a point in seventh. The Brit looked like he could gain more during the race but had to settle in the circumstances.

There are still plenty of points to play for but Ilott’s title hopes appear to be slipping through his fingers as Schumacher continues his charge.

Robert Shwartzman classified in 10th, a disappointing home-race weekend for the Russian.

Giuliano Alesi, with a solid weekend in his first weekend with MP, looks forward to the next race in the hopes of better results.

Louis Delétraz finished in 17th. Juri Vips classified in 18th, despite his retirement. Roy Nissany completed his Russian weekend in 19th. And rounding off the table, Drugovich classified in P20.

An anticlimax for such a promising race, but it’s good to see both Aitken and Ghiotto safely out of their stricken cars. 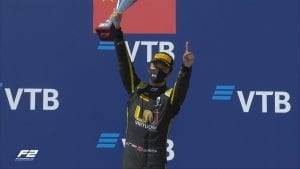