Trident finished the first race of the FIA Formula 2 Baku round without any points, despite showing promise in the opening stages of the race.

Richard Verschoor was running in the points for a large portion of the race and was enjoying an intense duel with Liam Lawson.

Verschoor was wheel-to-wheel with the Kiwi driver for the majority of his final racing lap until it ultimately ended his race. The Dutchman was positioned to take a podium until the incident.

“The final part of the Sprint Race was very tough on the team and on everyone’s morale.

“Verschoor had a very good race. However, in the closing stages, he made a fatal misjudgment while battling with Lawson for second place.

“Richard tried to defend himself by choosing an outside line, on a dirty track, which led him into the barriers. It would have been better to let the other driver pass, as there was no room to defend himself at that point.”

His teammate, Calan Williams, was involved in a scary crash after Ralph Boschung and Cem Bölükbasi came together.

The incident occurred on the last lap following the final Safety Car restart when Williams aimed to avoid contact with Bölükbasi, who had hit the wall beforehand.

Ricci stated: “It is a pity for what happened to Calan Williams in the closing stages,” before continuing to say, “The Australian driver could have lifted to avoid contact with Boschung, but on the other hand, the Swiss driver should have left more space to allow our car some space.

“Now, we will work to repair the cars in time for tomorrow’s race when we will aim to collect important points to move up through the ranking.”

Thankfully, all drivers involved were able to walk away from the incident.

Tomorrow is a chance to make up ground for the drivers as the big points are handed out on Sunday’s Feature Race, and Trident will be looking to take advantage of the fact that anything can happen in Baku. 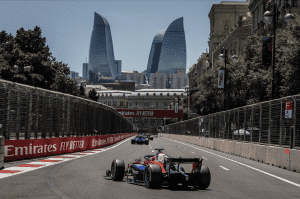