Formula 2 has announced a provisional calendar for the 2021 season which sees a radically changed line up from previous years.

Following news that the sport is cutting costs, it was announced last week that we would see racing at eight venues rather than the usual twelve race weekends.

Among those race weekends that the Formula 2 grid will not be returning for 2021 include Catalunya, Paul Ricard, the Red Bull Ring, the Hungaroring and Spa as those weekends will be only supported by Formula 3.

The season is set to start on the 26th-28th March at Sakhir in Bahrain for round one of the season before taking just under two months off before heading to Monte Carlo for the weekend of May 20th-22nd.

Baku is round three on the first weekend of June, before heading to Silverstone in round five on the 16th-18th of July. This then signals the end of the first half of the season with the series taking a summer break.

Monza then welcomes the championship back after the summer break with round five of the season before heading to the Russian beach resort of Sochi two weeks later.

The series will then embark on a two-race Arabian tour with Jeddah getting Formula 2 action for the first time on the 26th-28th of November, before we head to Abu Dhabi finishing the season on the weekend of the 3rd-5th of December.

Formula 2 CEO Bruno Michel talked of his excitement of the series arrival in Jeddah whilst also explaining the reasoning behind some of next season’s choices.

“As announced last week, one of our costs control measures for 2021 is to limit the number of rounds which will automatically lessen the teams’ budget. But thanks to F1 and the FIA’s support, we will now have three races per event. This means that although we have reduced the number of rounds to eight, the season will still consist of twenty-four races overall as per the past three seasons.

“The 2021 F2 provisional calendar is a mixture of European and overseas circuits, with venues that have always been very popular amongst the drivers and the fans alike. The addition of Jeddah in Saudi Arabia makes it all the more exciting. I’m also pleased to confirm that once again all F2 events will run alongside Formula 1.” 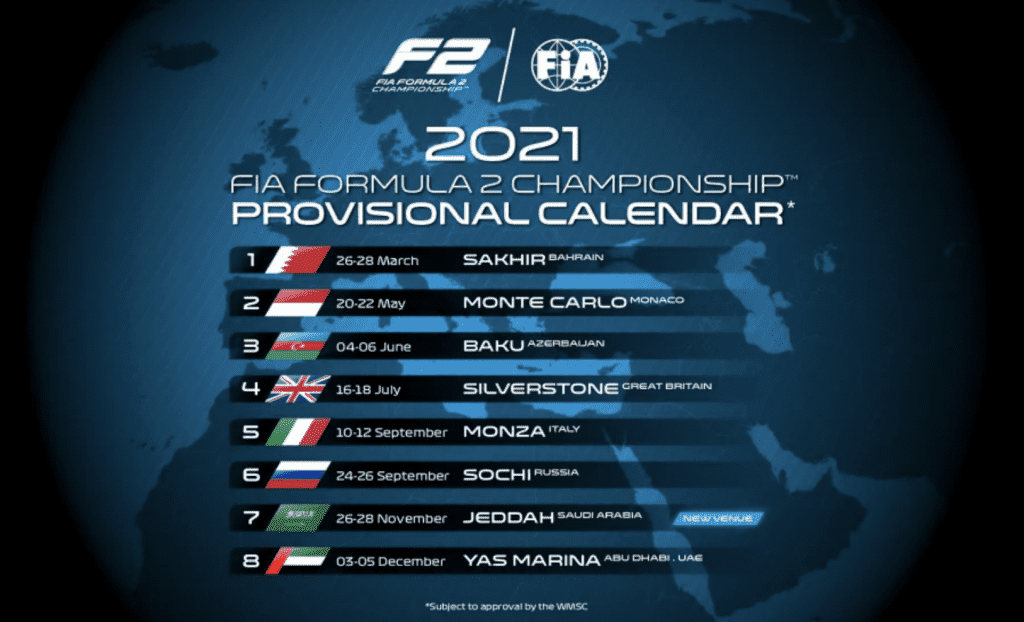