Liam Lawson took a superb FIA Formula 2 victory for Carlin at Paul Ricard after fighting through the field with overtakes on Marcus Armstrong and Jehan Daruvala to take his second win of 2022.

Daruvala took the second step on the podium as Armstrong was outmuscled in the closing stages, letting home driver Theo Pourchaire claim the final trophy. However, the Frenchman may need to explain his overtake to the stewards.

Championship leader Felipe Drugovich delivered solid points for his championship challenge with MP Motorsport and finished in P4 just ahead of Jack Doohan and Juri Vips.

Daruvala got a perfect start from pole position and led into Turn 1 as Armstrong passed his compatriot Lawson to take P2.

Daruvala built a slim advantage over Armstrong in the opening stages as the race leader desperately tried to break clear over the 1-second DRS window.

Lawson hunted down Armstrong and attacked the Hitech driver on Lap 4. He made use of the powerful DRS on the Mistral straight and muscled his way past at the chicane in an aggressive move.

A third of the way through the race, the New Zealander began to close down Daruvala at the front of the field and got within DRS range of the PREMA driver. Behind, Armstrong and Pourchaire kept the front two on their toes to remain everpresent challengers for the podium positions.

The race director had to deploy Safety Car when Enzo Fittipaldi collided with ex-F1 driver Roberto Merhi at Turn 8 in a clumsy incident ending the Brazilian’s day.

The Safety Car came in on Lap 12, which allowed Daruvala to streak away from his nearest rival Lawson with a great restart to maintain the lead.

However, Daruvala’s restart pace didn’t continue as the race continued. With six laps to go, Lawson closed in and swept past his fellow Red Bull Junior at Turn 8 in an impressive move to snatch the lead away from Daruvala.

The Kiwi immediately pulled away and left his PREMA rival to fall back into the clutches of Armstrong and Pourchaire in the closing stages of the Sprint Race.

Armstrong dove down the inside of Daruvala at Turn 8, but he ran wide, which opened the door for Pourchaire, who capitalised with a superb move at La Beausset. Unfortunately for Armstrong, he continued to descend through the order thanks to losing speed as Pourchaire barged him off the track.

Armstrong’s team mate Juri Vips passed the Kiwi at the final turn on the penultimate lap as he capitulated in the closing laps ending up with zero points after challenging for a podium. 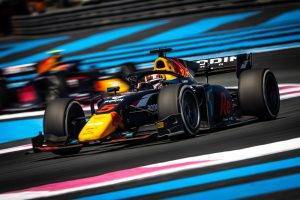