Théo Pourchaire sailed to a chaotic Sprint Race 1 victory in Monza for ART Grand Prix, in the FIA Formula 2 championship.

The Frenchman has experienced a mixed bag of results this season with an historic Monaco Feature Race win in May, while seeing retirements in Bahrain and Baku.

Pourchaire worked hard to utilise slipstreams and maintain position to finish in P1 today at a favoured circuit in Monza.

“Monza is one of my favourite European tracks. From the start of the weekend we were one of the fastest teams. We were extremely confident. The races are so good, you can overtake with a lot of action.”

Comparing Monza to his Monaco win he said, “The victory in Monaco was mainly because I was in pole position. Today I knew I had the pace to win. I took a good start, and was the fastest car on track.

“I know that from the beginning I was faster than Jüri and Beckman in front of me and I wanted to overtake them as soon as possible. I did a good overtake without DRS on Jüri.

“I was more confident in the car, and once I overtook them I was in free air and was pushing doing quail laps to create a gap.”

“The car was really good from my side, and I would like to thank the team for that. Today we showed that the pace is there. I kept my qualifying position and did some great overtakes.”

“It was difficult to warm up the tyres and brakes after the Safety Car restarts.

I think I was quite good on that… Maybe I was too careful in the beginning where Liam Lawson tried to overtake me.”

Already looking ahead to the second Sprint Race this afternoon, Pourchaire said:

“We need to do it again in Race 2. We have to avoid contact, put in some great overtakes and not make any mistakes.

“We are fast and I am confident.” 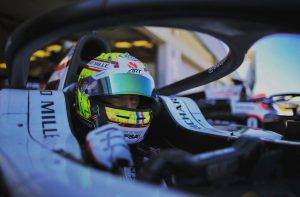