As the continuing effects of Covid-19 spread across the globe,  Formula 2 announces the first official Esports race of the season.

The format is a 30-minute Feature Race, followed by a five-lap Sprint Race, where the top eight positions will be reversed.

As per the real-life schedule, we will see Virtual races being held at the Barcelona, Monaco and Baku circuits.

The grid is locked ?

Some familiar faces and old friends will battle it out in our first virtual round ?#F2 #RaceAtHome pic.twitter.com/XaqNup6FG7

Similar to live Formula 2 races there are track rules, such as tyre changes. Plus penalties for breaching track limits or crashing into other drivers.

What’s significant to know is all the cars are created equally, which is a delight for live race teams and fans if their cars aren’t always competing at Ferrari and Mercedes level.

Joining the races remotely, the participants have to surrender to the reliability of modern technology. Former F2 driver, Lando Norris hasn’t had it easy. To his, and fan’s frustration, he was disconnected from the Bahrain race. His A.I kicked in and the viewer’s witnessed the birth of #LandoBot. Norris eventually took control back, going on to finish fifth.

It appears Lando who has helped gain the Esports momentum with other drivers following suit. His online antics of calling the most famous names in his address book while live on air, plus announcing how people could sign up to Twitch free of charge, saw his system crash minutes later as hundreds of fans subscribed to his channel. All of this has contributed to the amusement.

Being a professional driver doesn’t always translate to the sim as many might expect. Though impressively, new to the scene Charles Leclerc has picked it up quickly, winning two races out of four, including his rookie race (#NotTheGP – Aus). In yesterday’s Virtual German GP where he finished second, he not only mentioned he’d invited Vettel to join them in future races, he also laughed and enthusiastically said at the end, he’s really really enjoyed it.

Winner of the Virtual Bahrain GP, F2’s Guanyu Zhou described the experience on a Twitter post as a “Crazy one! So fun.”

He proudly finished third at his home race in China, driving again for Renault F1.

There has been antics and amusement throughout. More-so with racing pundit and former F1 driver, Johnny Herbert, competing in the Bahrain GP. He started like a lightning bolt, intentionally cutting the first corner, to emerge ahead of the pack as the race-start saw carnage all around.

For those who will sorely miss him once the 2020 live racing season begins, it was a pleasure to see Nico Hulkenberg making a start at the Bahrain GP. Many have called for him to participate more regularly, in the hopes they will see him return to live Formula 1 races one day soon.

Also, a dream some would like to see come true, was Nicholas Hamilton, younger brother of six times World Champion, Lewis Hamilton, racing in Bahrain.

There have been other types of sim races, Campos driver, Jack Aitken, competed in yesterday’s All-Star Series.

Accrediting the virtual races will, of course, bring more serious and competitive events and racing fans will no doubt welcome it. But there’s room for fun too, and the antics of Herbert and Russell will hopefully continue until the live-action returns.

To the delight of racing fans, the most significant participant in today’s Bahrain GP is Juan Manuel Correa.

Following the devastating crash at Spa-Francorchamps last season, where rising talent Anthoine Hubert tragically succumbed to his injuries; Juan Manuel is on a long journey of recovery after his involvement in the incident.

Nobody imagined Juan Manuel could return to compete again this season. But because of Esports and the virtual races, the impossible has become possible. Not only will he participate in the Formula 2 Bahrain race, but he’s also competing immediately after in #F1Esports Virtual Dutch GP at 18:00, held at Interlagos, Brazil. The circuit was chosen by fans when put to a vote because the 2019 game does not feature the Zandvoort circuit as of yet.

It isn’t only racing drivers who are joining in the fun, Olympic Gold Medalist, Sir Chris Hoy, One Direction’s Liam Payne, Madrid Goalkeeper, Thibaut Courtois, and Professional Golfer, Ian Poulter, but to name a few have tested their sim skills against a competitive and experienced field. Courtois has been impressive throughout, finishing in sixth position in the German GP.

Others to look out for? It’s worth mentioning regular sim racers Jimmy Broadbent, Cem Bolukbasi, and yesterday’s German GP winner, TRL_Limitless, who seemingly came from nowhere to snatch victory over Charles Leclerc. The epic battles between the latter three in both stages of the race were as exciting as any live performance.

These organisations are not only hosting virtual races for entertainment, Veloce, for example, are currently raising funds for UNICEF UK to help support healthcare workers and families that are affected by Covid-19.

It can be argued that sim racing cannot replace a full weekend programme of interviews, pre and post-race analysis, the high stakes of Championship points being lost and won, but nobody is claiming it is, this is simply an option for race fans to fill a gap until live racing resumes.

The drivers participating frequently will no doubt retain a competitive spirit they can take forward when the season restarts, gaining a psychological advantage over drivers who have been less active.

The races can be watched through official F1 channels, but having more than one device can enhance the experience by following drivers on their personal Twitch accounts and listening in.

We rarely see drivers at home being themselves. Watching the drivers race through their Twitch Channel couldn’t get any more fly on the wall. It’s natural. Candid.

The Virtual Esport world has no doubt brought the two worlds together. And even though this year’s live motor racing is currently unconventional, it is keeping the sport alive in a world with so much tragedy and sacrifice.

Motorsport has united people for decades, and it continues to do so in an imaginary world where there is no virus, no social distancing and no lockdown. 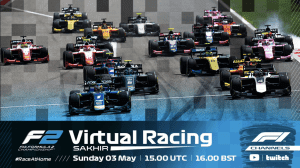