With the rise of Virtual Racing to the masses and last week’s first official Formula Two race we are back again this week with Round Two in Spain and the Circuit de Barcelona-Catalunya.

This, of course, is the virtual equivalent, however, the drivers behind the sim are very real, and they’re racing each other fiercely!

The competition is hot, and like real life, they are embracing the connections with each other.  Luca Ghiotto commented in a recent follow up to the Bahrain Grand Prix that, “…. it’s a nice way to keep in touch with the others.” (fiaformula2.com)

No practice? ?
No problem! ?@luca_ghiotto let us know how he got on in the first #F2 virtual race! ?#RaceAtHome https://t.co/8QvmZAuMll

The melting pot of drivers from a variety of formulas is making for exciting viewing, as we are not only watching the Formula 2 drivers we know and love, we are also getting the opportunity to see potential F2 stars of the future.

The circuit is well known to the drivers in all categories due to its standing as a Formula 1 race circuit since 1991.

In the virtual world, however, one element that isn’t always a certainty are the game settings such as the weather system. The wind direction can change course without warning, making it challenging for the aerodynamic set up of the cars, as both understeer and oversteer can be interchangeable. Will the event organisers simulate this to spice things up a little? Or maybe they’ll consider a wet race.

The circuit’s a fan favourite because it’s an overtaking track, where long corners, fast chicanes, and the long straights can be made use of; Turn 1 usually sees most of the overtaking action. Last year saw some plucky overtaking manoeuvres, one from Carlin’s, Nobuharu Matsushita, outside of Turn 5.

Race fans will know that the Circuit de Barcelona-Catalunya is an opportunity to see who has the raw skills as well as courage given its good mix of straights and corners, this is the main factor as to why it is chosen by Formula 1 as the official test circuit.

Jack Aitken will no doubt be looking to repeat the success of 2018 where he won the Sprint Race and finished second in the 2019 Feature Race.

Guanyu Zhou may be inspired with the memory of his first Formula 2 podium last year, driving the Uni-Virtuosi Racing car. The 2019 rookie finished an impressive third in the Feature Race and fourth in the Sprint.

Callum Ilott (then racing for Charouz) also earned his first Formula 2 podium by finishing third in the 2019 Sprint Race.

Sean Gelael will be hoping he makes the same dream start to his race as he did last year.

Who else is excited to see what our 2012 champion can do in the next round of F2 Virtual Racing on Sunday?!#F2 #RaceAtHome pic.twitter.com/KWo72nUogv

Callum Ilott retains his seat with Uni-Virtuosi and joining him, this season’s teammate, Guanya Zhou.

Unless you’ve been self-isolating with a social-media ban, it’s not difficult to understand why Arthur Leclerc returns to PREMA with Formula 4’s, Sebastian Montoya, son of Formula 1 favourite, Juan Pablo Montoya.

There’s no change at Charouz Racing System. Last week’s Sprint Race second placer, Louis Delétraz returns, as does Juan Manuel Correa, who nobody thought we would see racing again this season. But with the power technology and his own power of recovery, motorsport fans worldwide are very glad to see him present.

Everything stays the same at MP Motorsport, with Nobuharu Matsushita and Felipe Drugovich suiting and booting up.

Artem Markelov takes the role at HWA, with the spirit of Anthoine Hubert racing alongside him.
*HWA Enters one car #18 – #19 is permanently reserved in Antoine Hubert’s memory.

What are you hoping for in this week’s Virtual Grand Prix? More duals from Aitken and Ilott? Leclerc, with another clean sweep? Or a poignant win for Correa, or Floersch? Let us know your thoughts! 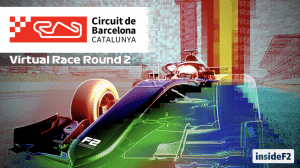