The #RacefromHome FIA Formula 2 Virtual GP series returned this weekend with round two at the Circuit de Barcelona-Catalunya in a sunny digital Spain.

This has been the second #VirtualGP that is completely dedicated to the junior formulas and we had another star-studded grid with F2 and F3 drivers taking part. We discussed in our Race preview how competitive the drivers are with this new Esports format and yet again the field battled all race long to entertain the motorsport fans as they would in reality.

As the lights went out we saw a clean start from all the drivers as they gave each other room and swept around Turn 1. Leclerc retained his qualifying position and emerged as the race leader, while Norman Nato was second, followed by Guanyu Zhou in third. The trio would become the story of the race as we watched last weeks stars Leclerc and Nato take the lime-light with Zhou not far behind.

We saw returning hero, Juan Manuel Correa, unfortunately, head off the track and rejoin some way down the order. While inÂ Sector 1 a yellow flag was waved as cars tangled; Rowland, DelÃ©traz, Aitken and Matsushita all spun, while Pourchaire and Valsecchi got caught up in the virtual dust with Markelov heading out of the race.

Further up the grid, we saw Chinese star Zhou make a crucial move on Nato for the second position to stay within a second of race leader Arthur Leclerc.

Lap 4 saw a battle for the lead between Leclerc and Zhou heat up and by Lap 5 Zhou was all over the back of Leclerc.

They jostled for the lead through the lap and Arthur lost out to Zhou in a dramatic spin which would prove to be the race defining moment. While trying to recover his lost lead Zhou got into the slip-stream of Leclerc and both cars touched seeing the Monegasque spin outÂ resulting in Zhou earning a three-second time penalty for the incident.

We saw a flurry of action on Lap 6 as drivers began the pit-stops, switching from the hard tyres to soft.

Juan Manuel Correa’s race went from bad to worse as he was pushed hard to make up ground only to see himself issued a five-second time penalty for speeding in the pit-lane.

Zhou rejoined the race, still ahead of Leclerc, following his stop and worked his way back up the field after emerging in P6, with Callum Ilott finding himself in second place but yet to pit.

Lap 10, Nato eased past Caldwell, with a stern look of concentration on his face as we took a rare glimpse at him driving through his webcam. Something racegoers donâ€™t normally get to see when theyâ€™re racing live.

Leclerc stealthily worked his way back up to P4 and on Lap 15 taking third place from Oliver Rowland with ease.

Norman Nato made a mistake on Lap 16 and plummeted down the order! Promoting Leclerc up to second-place and Rowland up to third, with Zhou now in Leclerc’s sights.

But as quickly as we saw him move up the grid we hear, Leclerc is OUT on the final lap!!

After he received another three-second time penalty, he is shown in the gravel off track and unable to rejoin the race! Â

After an eventful race full of time penalties, Zhou took the WIN!!

Oli Rowland finished in Second but was demoted to third place after a three-second penalty was applied, which promoted Zendelli to Second!

Norman Nato snatched victory from the jaws of defeat after winning a typically chaotic sprint race which saw a superb battle between the Frenchman and Charouz driver Louis DelÃ©traz.

At the start, it was DelÃ©traz who got away best from second on the grid whilst pole-sitter Theo Pouchaire bogged down on the line and fell to fourth.

Pouchaire had to take avoiding action at turn one, further back there was chaos into the first corner as Olli Caldwell was spun around into turn 1, whilst Sean Geleal and Davide Valsecchi were given two-second time penalties for corner-cutting and causing a collision, whilst Arthur Leclerc emerged from the chaos in seventh from the back of the grid.

Pourchaires miserable sprint race continued with a penalty and then a spin causing the Frenchman to tumble down the order to twelfth.

Upfront DelÃ©traz was holding Norman Nato at bay by just over half a second with the Frenchman closing lap after lap with DelÃ©traz keeping the pressure up by bagging the fastest lap on lap 3 whilst blocking every chance that Nato had of making the move.

Further down the order, Arthur Leclerc charged up the standings after his nightmare feature race which saw him retire with a lap to run, with the Monegasque up to fifth after using the DRS to overtake Oliver Rowland on the main straight.

On the last lap, Nato perfected a late-breaking maneuver into turn one to push DelÃ©traz off the track and with it to take the win off DelÃ©traz whilst Aitken hung on to take third from Zhou and the hard-charging Leclerc with Rowland, Felipe Drugovich and Sebastian Montoya rounding out the top eight._

The virtual Feature and Sprint Races had drama throughout, but here's how we ended ?#F2 #RaceAtHome pic.twitter.com/tPXmqljhzB

Watch the race again here on the official F1 YouTube

_
Let us know your thoughts @F2inside on Twitter by sharing this post.
Ensure you check our other pages here on insideF2.com for all the latest news.
_
_
Written by:
Race 1: L.A. Wilshaw /TwitterÂ @1_LA
Race 2: Ed Spencer /Twitter @EdSpencer99
_
_
_ 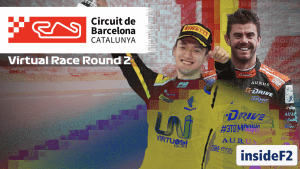