As predicted, during the FIA Formula 2 Sprint Race, the rain in Sochi fell… and wouldn’t stop. The storm worsened and lightening dramatically filled the sky.

Initially, teams were ready and drivers leapt into their cars. But it wasn’t to last.

As the pit lane remained full of stationary Formula 2 cars, sequential messages were relayed to teams from Race Control, “Pit Lane Opening Delayed: Next Update at…”

Inevitably the final message came through: “Race 1 is Postponed.”

When asked how they were spending their time during the delay, Jehan Daruvala, Oscar Piastri and Théo Pourchaire were happy to share their ‘uneventful’ morning.

“I’ve been sat in a chair in a tent for the last 4-5 hours because it’s the only place with a heater, and it’s pretty cold outside.

“A lot of the drivers were in here and we were just talking like drivers do when we have spare time, because we don’t have too much time normally to talk to each other on a [race] weekend, so it’s not too bad.”

“I’m just sitting around chilling, there’s not much else you can do but try to keep warm.”

After seeing a flooded paddock earlier in the week, the circuit provided shelter for the feeder series boys.

Piastri said, “We don’t have the trucks or anything this weekend so we’re sitting out here in the cold in a big tent organised by Sochi. Like Jehan said… the heater has been a nice discovery.”

“I’m just staying chilled out and watching the weather, and surviving a few thunder storms has been the cause of the day.” – Piastri.

“To be honest I did nothing [laughing]. It’s been a really boring day. Apart from waiting in the pit lane and coming back to full wets in the box, and then to the tent. Nothing. But it’s like that. Safety first.”

“We are waiting for the good weather. I hope we will race today.”

The weather picked up enough for the Formula 1 Qualifying session to go ahead, and so all fingers are crossed Formula 2 sees some action today too. 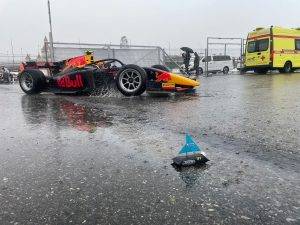