Following his first full season in FIA Formula 2, Campos Racing’s Ralph Boschung had a season remember, we look at what he achieved in 2021 and look ahead to his 2022 season.

Prior to this though it looked like we would struggle to settle in the top junior series. He had previously worked in part seasons with the likes of MP Motorsport and the Italian Trident Team. However, following some entrepreneurial skills to source the funding last year, he eventually re-joined Campos Racing in 2021 looking to complete in his fourth season and this time hoping to be seated for the full campaign.

With a total of 59.5 points and a 10th position in the driver’s championship, 2021 was undoubtedly Boschung’s best season so far, topped up by an impressive fight for the win during the Sprint Race 2 in Abu Dhabi, against Prema’s Robert Shwartzman and UNI Virtuosi’s Guanyu Zhou. Both finished second and third in the F2 driver’s standings respectively.

Despite acknowledging the superior performance of the machinery used by his rivals, Boschung confirmed he was pleased with his season overall in a recent interview with FIA Formula 2,  “I’m happy with how the year went”, and that he and the team are conscious of, “what still needs to be done to continue improving throughout the upcoming season”.

The 2021 season has seen the young driver from Monthey, Switzerland struggling to score points initially in the first round at Bahrain. A non-finish (DNF) in Sprint Race 1, following a collision with DAMS’s Marcus Armstrong was an unfortunate start. This preceded a 17th place in the second Sprint Race.

Boschung and his team redeemed themselves during the second race-weekend held in Monte-Carlo, where the Swiss driver was able to collect 22 points overall completing one of his best weekends in F2, despite racing under very challenging conditions with rain pouring heavily on the circuit during Sprint Race 2.

The championship arrived in Baku for the third round of the season, Ralph was able to pull out a Top 10 finish in qualifying, and confessing on his own website that he was “confident he and the team could have fought for pole”.

Starting in first position in Sprint Race 1, he was able to fight with some of the strongest drivers on the grid, ending the race in sixth position just in front of DAMS’s Armstrong. Unfortunately, Sprint Race 2 did not bring much luck to the Swiss driver, suddenly seeing himself stuck between two cars and remediating a broken suspension, forcing him to retire. However, an overall score of 14 points left the young driver very happy, looking forward to race in Silverstone in the upcoming week.

In Silverstone, the 24-year-old was unable to gain any points, with two 14th places and a DNF; in Italy, Boschung managed to stay out of trouble throughout the whole weekend, but did not manage to reach the points zone in any of the races.

The last three rounds of the season have seen the Swiss star shine a little bit brighter. A well-deserved 6th position in the only Sprint Race of the weekend in Sochi gained the F2-veteran 4 points, which marked the start of a very positive end to the season.

It was though in the following round at Jeddah, that he was able to show his true stamina, when chased by some of the highest-ranked drivers within the championship. After finishing in the midfield in both of the Sprint Races, he managed to not only come out of a very eventful Feature Race (with two yellow flags, two safety-cars and two red flags) untouched, but also to score his first podium of the season.

Post-race Ralph explained, “The first two cars were just on a different level, but I managed to hold everyone else behind”, said the Swiss driver proudly at the end of the race.

He then went on to finish his 2021 season on a high, collecting a total of 12 points in the last weekend, by scoring another podium in Abu Dhabi, securing a top 10 finish in the driver’s championship and a 7th position for Campos Racing in the team standings.

Following the post-season F2 testing at the end of November, Boschung was confirmed to be staying with Campos Racing. He will continue his adventure with the Spanish team next year and we are sure he will be hoping to build on these career best results. 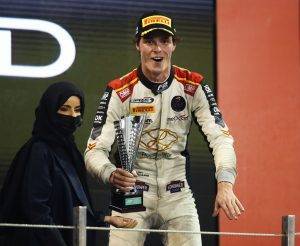