During the unprecedented period of global lock-down there was a consistent stream of real racing drivers participating in online sim racing events.

These virtual Championships drew to a close as we looked forward to the elite formulas reuniting for the much-anticipated start to the 2020-racing season.

It’s fair to say that views on sim racing have changed across the board as the race-deprived searched for a fulfilling alternative.

Real racers and race fans have a newfound respect for this separate and unique discipline.

Racing drivers aren’t strangers to simulators. Long hours are put in at the factories to gather data for the development of race cars.

But can the factory simulator and the competitive world of Esports sim racing be compared to what drivers experience physically during a real race?

Formula 1 Performance Coach, Martin Poole, exclusively shared his expertise on what he believes to be the key physiological effects real racing has on a driver compared to a sim race.

Sim racers are not trained to control their adrenaline response like real racers. For example, when cars line up on the grid, real racers experience an anticipatory rise in adrenaline, heart rate, stroke volume, and with experience, are able to contain and even use these fight or flight reflexes to their advantage to create an optimal launch and a well-controlled turn one.

Controlled adrenaline aids focus and concentration. It begins in karting, and through experience improves as drivers progress up through single-seat formulas.

The senses and physiological responses increase at the start of a race. This is known as the anticipatory rise.

Peaks in adrenaline response can also be seen if the driver is battling with another driver, or if there are issues, such as car problems or tyre wear, and on pit stop in/out laps.

On the occasion when real racers wear either ECG monitors or heart-rate belts the results can be overlaid with events from the race to compare the driver’s physical responses.

During a live race there is an overload of the senses that includes, the noise and feel of a real race car and the crowd and atmosphere.

The enormity of the event, naturally heightens levels of adrenaline.

(It’s fair to suggest that because of the absence of crowds during the current ‘behind closed doors’ Formula 1 and Formula 2 races, the extreme anticipatory rise levels usually experienced by drivers has be affected.)

In addition, the danger and potentially life-threatening element to a real race creates a natural fight or flight hormone release in drivers.

Lewis Hamilton stated after Sunday’s British Grand Prix, that he was in fight or flight mode to jostle the car home after his tyre burst on the final lap.

This same anticipatory rise or adrenal release cannot be recreated in a simulated environment. The results would vastly differ. The peaks would be practically non-existent.

This doesn’t disregard the high stakes of a sim race or the nature of the event. It’s simply a physiological difference.

If adrenaline isn’t controlled during the anticipatory rise the driver could miss the race start. The launch may not be as quick because his or her thought processes wouldn’t be as sharp.

Spatial awareness and perception can be affected, and decision-making, compromised. During live races, this can be dangerous as it can cause accidents.

A lack of adrenaline can cause a lapse in focus and concentration especially over a race distance.

Adrenalin levels can lower, contributing to loss of focus, during less eventful moments of a live race, or if a driver is leading by vast margins.

This famously happened to Ayrton Senna at the 1988 Monaco Grand Prix. Ahead of Prost by 55 seconds on lap 67/78, Ayrton had a momentary lapse in concentration and spun out of the race.

Applying brakes and accelerating on real race cars creates a G-force that sim racers do not experience in a static simulator.

Lateral loading on the neck muscles experienced during high-speed turns and the heavy G-forces created in big braking zones create a huge physical demand on the driver.

Although both sim racers and real racers can put the hours in at the gym, real racers still have an advantage through the high specificity of neck training through years of karting and single-seat racing.

When neck muscles drop-off, it creates a huge mental distraction, and an unwanted change in driving style (earlier braking for example to reduce the G-force impact).

Having to place the head into a different, more comfortable position, compromises the line of vision into the apex of corners, thus causing the driver to lift and lose speed to make the corner.

If a sim driver were to transition from sim racing to real racing, it would be a physical challenge, involving a high level of neck training to cope with extreme levels of G-force.

This became apparent at the British Grand Prix when Nico Hulkenberg was called upon to replace Racing Point’s, Sergio Perez, after he tested positive for COVID-19.

Following Friday’s Practice sessions and Saturday’s Qualifying, Hulkenberg’s neck was naturally affected by the G-forces he hasn’t experienced for months.

Not only because of the German driver’s lack of concentrated training but because the Racing Point car is currently one of the fastest Formula 1 cars on the track.

Being aerobically fit for sim racing has its advantages, as it does for any task that requires sustained concentration, reaction and decision-making.

There is still an intensity of concentration and application that sim racers maintain for a certain amount of time. The fitter a driver is the more he/she can sustain higher levels of endurance.

Both real racers and sim racers need to have fuel on board because glucose levels can quickly deplete in physical or cognitive tasks. While muscles can tap into protein and body fat stores, stored glucose (Glycogen) is the only source of energy the brain can use.

Real racers can train their liver and muscles to store glucose – a response from physical exercise and conditioning. Sim racers would not necessarily incorporate this into their physical training programme.

Sim racers are highly skilled at what they do. As long as drivers are hydrating and consuming glucose during sim races, they will remain alert and energised and be able to perform better.

The ambient temperature of the room where the simulator is set up can be adjusted to a more comfortable setting. Therefore, seeing little affect on the race outcome.

For real racers, locations such as Singapore, where the humidity is high, drivers experience extreme cockpit temperatures, fluid loss and dehydration.

It results in physiological affects, such as fatigue and lightheadedness.

This sees mistakes in the final third of the race.

Clothing can have an impact on the outcome of a race.

A sim racer can choose their attire and sit in relative satisfaction. Whereas, a real racer has limited options to increase his or her comfort levels.

The official FIA requirements of clothing, such as fireproof underwear, a race-suit, balaclava, and helmet means personal preferences are out of a real racing driver’s control.

The real life situation of a driver’s race-day routine and build up to the event cannot be recreated In the same way prior to a sim race.

Real racers are used to a set pre-race routine, which starts the morning of the race.

Sim racing requires a driver to be able to tune-in almost instantly.

This is something real racers can struggle with because of years of conditioning and discipline.

Throughout the global lock down real racers found a way to maintain their competitive edge, and enhanced their own driving ability and skills, by participating in sim races.

Initially encouraged by McLaren driver, Lando Norris, this new era of real racers competing in sim racing is a modern approach to driver preparation and development.

The level of physical fitness has been less demanding but virtual racing has allowed the likes of Louis Deletraz (Charouz), Callum Ilott (Uni-Virtuosi) and Jack Aitken (Campos), to maintain a competitive racing driver mode.

There is still an element of planning, preparation and participation to a sim race. Which has been good practice for the young Formula 2 drivers.

There are vast margins in physical training and conditioning between sim racing and real racing because of the nature of the real and virtual realities.

However, the competitive nature of both sim racers and real racers is comparable, and their unquestionable skills are undoubtedly transferable.

It was clear to see that real racers returned to their formulas advantageously prepared for the 2020 season.

Those Formula 2 drivers who regularly participated, maximised on this experience, benefiting their #RoadToF1. 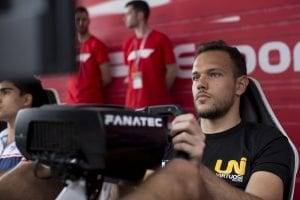