As the 2021 Formula 2 season starts in Bahrain, Red Bull Juniors Jehan Daruvala, Jüri Vips and Liam Lawson all reflect on March’s F2 Testing for their respective teams and how the new Formula 2 format may impact the F2 grid this season.

Racing and Testing at a Bahrain circuit that Vips, “enjoys” and Daruvala admits is, ‘probably his favourite place’, the 22-year-old Indian, alongside new team mate Dan Ticktum, reflected on F2 Testing and how there are hopes that Carlin can pick up where they left off and look ahead, “to a great season” in 2021.

Daruvala spoke about the new Formula 2 format being, “the only unknown” this season, as fellow Red Bull Junior Jüri Vips raised the point that he too is, “not entirely sure about the new schedule.”

The 20-year-old Estonian added that he thinks it is, “quite OK to have three races” but there could be a possibility drivers may strategically place themselves lower to gain a more advantageous grid position.

Meanwhile, Liam Lawson will have to quickly adapt to the Formula 2 car after making the step up from FIA Formula 3.

Lawson admitting that he did not expect the F2 car to be, “so different”, will also have to get used to the, “different sort of driving style” this season. As well as the force and energy from the carbon brakes in the F2 car compared to the F3 car.

However, both Hitech Grand Prix drivers Vips and Lawson felt that testing, “was very positive” and are, “pretty happy” with the team’s preparation, despite this not being reflected in the F2 Testing results.

Both, will be focusing on consistency in race runs (a new learning curve for Lawson) and working on maintaining a strong qualifying pace and programme for Hitech Grand Prix throughout the season.

Liam Lawson will also be competing in DTM this season and receives the first chance to race at Monza out of all the 2021 F2 grid. Lawson will be alongside Red Bull Reserve Driver Alex Albon who graduated to FIA Formula 1 in 2019 from DAMS to drive for both Toro Rosso and Red Bull Racing.  So, could this provide the New Zealander with the extra edge over his Formula 2 Red Bull rivals this season?

With the Red Bull trio looking to follow in the footsteps of Yuki Tsunoda, possibly making the step up to Formula 1 at AlphaTauri or Red Bull in 2022, the 2021 Formula 2 season could be a significant one for all three. 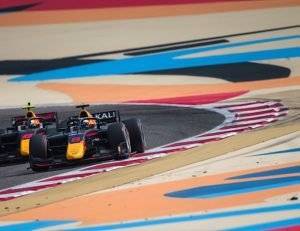